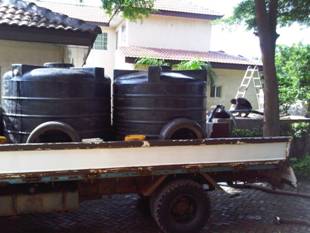 The Osu Traditional Council has inaugurated a 1,000-gallon water tank for the people of Abokobi-Kponkpo, in the Ga East Municipality in the Greater-Accra Region. The Council has also provided the community with electricity supply.

The gestures were the initiative of the Osu Mantse Community Development Initiative (OMANCODI), which was established to support communities under the Osu Traditional Area.

The provision of the water tank would solve the water challenges that had faced the Abokobi-Kponkpo community over the years.

Inaugurating the facility, Nii Okwei Kinka Dowuona the Sixth, Paramount Chief of Osu and President of the Traditional Council, described the gestures as a share of love, saying ?to part with what you have with those who do not have, is a sign of love.?

He said love supersedes everything and that ?what is left for us is to come together and mobilize the legacies bequeathed to us which have been taken over by strangers. This does not mean we are going to forcibly claim what does not belong to us.?

The Osu Mantse regretted that the woes of Osu people in development were due to litigation, and said this has ’caused us financially and lost of properties, which has affected our children?s education, while our daughters are being impregnated irresponsibly.’

?My brothers and sisters it is not good going this way. It is very dangerous for the community and the future of the youth as a whole. ?

Nii Dowuona told the people that he had had interaction with some people outside the country who had shown interest to invest in education, and would ensure that communities under the Traditional Council benefitted.

?We have started with Kponkpo community, and it would be extended to the rest of the communities under the traditional council.?

Mr John Kwao Sackey, Ga East Municipal Chief Executive, asked the people of Osu to take advantage of the social amenities being provided, to come and reside and invest in their communities.

He said, this would help accelerate the rapid development of the traditional area.

Giving some historical background, Mr Sackey said the Kponkpo community was used by the Danes during the slave trade as one of the eight routes in the Greater-Accra Region, and urged the chiefs and people of Osu to preserve these artifacts for the youth, and even generations yet unborn, to know their backgrounds, as well as serve as tourists? attraction to generate revenue.

The MCE appealed for the establishment of an educational endowment fund to support brilliant but needy children of Osu.

Nii Addokwei Addotei, Kponkpo community leader, expressed gratitude to the Osu Mantse and the Traditional Council for the provision of the water tank and the electricity, and further appealed for a basic school for the area.