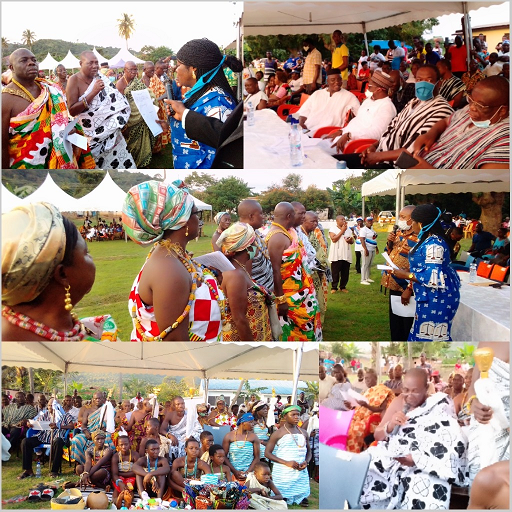 Mr Samuel Kofi Dzamesi, Minister of Chieftaincy and Religious Affairs, has said Traditional Councils should be seen as platforms for advancing development and not avenues for litigations.

He said Councils should be seen to integrate the people in traditional areas to work in unity for sustainable development, and not to disintegrate them.

Mr Dzamesi who was speaking at the inauguration of the Alavanyo Traditional Council in Alavanyo-Kpeme said the government attached much prominence to chieftaincy affairs and the Ministry of Chieftaincy and Religious Affairs had lined up a series of programmes such as inauguration of traditional councils to curb conflicts and chieftaincy disputes in the region and country as a whole.

He said the authority from the chieftaincy Act 759 of 2008 was the basis on which members of the Councils had been recognised as registered members of Alavanyo Traditional Council.

The Minister urged the members of the Council to carry out their duties diligently and follow laid down procedures.

Mrs Love B. W. Elimons, Judge at the Kpando District Magistrate, sworn-in the members, who took the oath of membership, secrecy and judiciary.

Mr John-Peter Amewu, Minister of Energy and New Patriotic Party (NPP) candidate of Hohoe Constituency, said the inauguration had given the Area an autonomy and urged the youth to support the Council.
He presented 10 canopies and 20 plastic chairs to the Council.

Togbega Tsedze Atakora VII, Paramount Chief of Alavanyo Traditional Area, expressed gratitude to the President and stakeholders for the support and peace initiatives among the area and its neighbours.

He said “Alavanyo has embarked on several years of wild goose chase to attain autonomy on Traditional Council bases, but to no avail. We have appealed to all preceding governments to grant us a Council status but it fell on death ears.”

Togbega Atakora said the Area would use the “new independence” to the benefit of its people and to advance the course of chieftaincy institution in the country adding that Alavanyo was made-up peace-loving people and would support government in its efforts to bring lasting solution to the long-standing dispute between the Area and its neighbours.

“I am pleased to announce that the guns are now silent and we pray that they shall be silent forever and we are looking forward to the day, when our people from the divide will walk side by side, collaborate and do things together as one people.”

He reiterated the Area’s position of dissociating itself and entire residents from secessionist activities and was not ready to condone or connive with any group, who would want to destabilise the nation and visit mayhem on innocent citizens.

The Paramount Chief cautioned the youth not to use Alavanyo soil as a launching pad for any diabolic adventure, but be alert and on the lookout for “these troublemakers, who might come to disrupt peace.”

Togbega Atakora appealed to the government to consider citing a factory in the Area to enable the youth to get employment adding that “what Alavanyo needs now is development.”

He noted that the opportunity for the area to be given a Council status, would have eluded them if not for the hard work of Mr John-Peter Amewu and commended him and Nana Addo Dankwa Akufo-Addo for the “great things” they were doing to transform Alavanyo, Hohoe and Ghana.

The Council prior to its inauguration was under the Akpini Traditional Council.