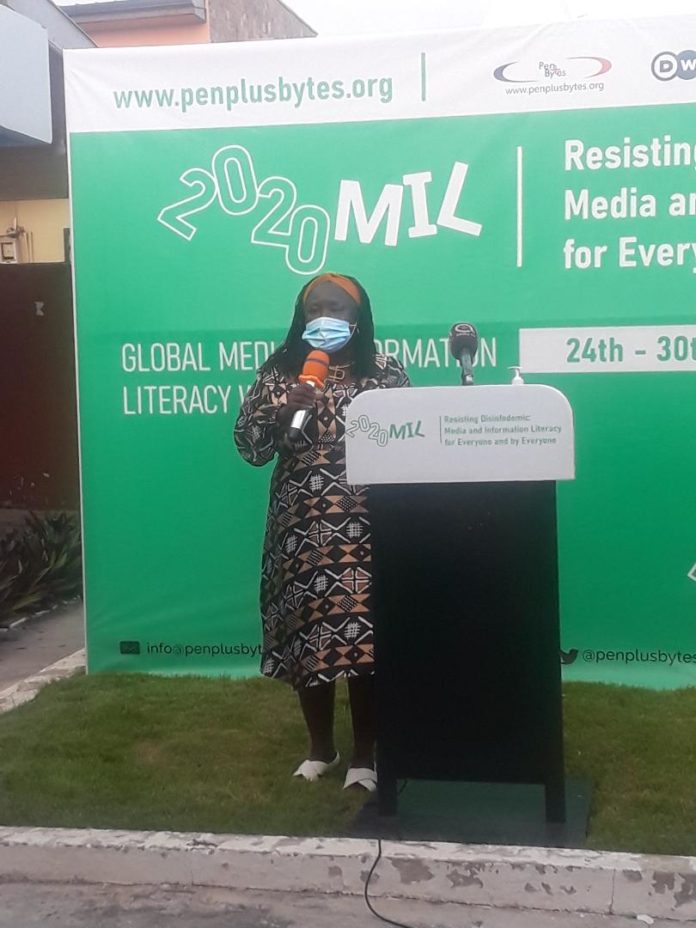 Professor Audrey Gadzekpo, Dean of the School of Information and Communication Studies, University of Ghana, has urged traditional media to position themselves as authenticators of true news from fake ones.

She said as social media was so much engulfed with fake news, the traditional media, involving, radio, television, news papers and the wire service should become the reference points for authentic news.

“The way the traditional media can be relevant will be to position yourselves as those who people come to verify whether a news item is true or not,” Prof Gadzekpo said at the launch of the Global Media and Information Literacy Week (MIL), hosted by the Penplusbytes, a not-for-profit organisation in Accra.

The MIL week, commemorated annually in October, afford media stakeholders to review and celebrate the progress made towards achieving media and information literacy for all.

The theme for the year 2020 MIL celebration is: “Resisting the Disinfodemic: Media and Information Literacy for and by everyone.”

Prof Gadzekpo expressed concern that often, the traditional media also reproduced fake news which were showcased on the social media platform without verifying, to the disservice of the public.

She, however, admitted that some traditional media houses were already doing their best to report credible and truthful news.

Prof Gadzekpo reminded the media of the upcoming Presidential and Parliamentary elections, and advised journalists to do well to quell fake news and be able to sensitise the public on how to discern what was the truth, as well as educate them to exhibit appropriate behaviour of not passing on falsehoods and injurious information.

Mr Jerry Sam, Deputy Executive Director, Penplusbytes, said under the auspices of UNESCO, and with support from DW Akademie, Penplusbytes had partnered the Ghana Institute of Journalism, the University of Ghana and the Ghana Commission for UNESCO to host series of events to mark the 2020 MIL week.

He said the activities would include workshops and seminars, webinars, online discussions and social media campaigns that would last from October 23 to October 30.

Mr Sam explained that the week-long activities would also provide the opportunity for stakeholders to discuss how to properly inform the public about the Coronavirus pandemic as well as on how to ensure a peaceful elections in December.

“All these are endangered by the volume of disinformation that has evolved from the COVID-19 pandemic, which has been dubbed, Disinfodmic,”she said.

Ms Abena Benewaa Fosu, Project Manager, MIL at the DW Akademie, expressed worry over the proliferation of disinformation within the society and how that was posing a danger to people around the world, especially around the COVID period.

She said a study conducted in countries including Ghana, had shown that three quarters of 15 to 25 year olds owned a smartphone, while over 70 per cent reported going online with mobile phones as well as using FaceBook and WhatsApp on weekly basis.

She said the Akademie, believed in information literacy for everyone and by everyone, and would, therefore, continue with its partnership with Penplusbytes and other major stakeholders to build the capacities of more young people in Ghana to become critical users and creators of media information “leaving no one behind.”

Mr Abdourahmane Diallo, UNESCO Country Head, the Guest of Honour, said this year’s celebration was the 10th to be marked globally, adding that the 2020 theme highlighted the opportunities and linkages in addressing the infodemic divide.

“All 17 sustainable goals resonate with this objective of MIL as an enabler of civic engagement,” he said.

He indicated that when citizens were equipped with MIL, they acquired the competences, and were informed, engaged and empowered. “They are able to understand the dangers of disinformation as well as the spiral of hatred and exclusion.”

He argued that MIL was at the core of freedom of information and expression since it helped citizens to understand the function of major and other information provided to critically evaluate the content and to make informed decisions as users and producers of information and media content.

He said professional journalists were, therefore, needed to well inform society on important issues and other happenings.

Mr Diallo congratulated Penplusbytes for leading the process of getting both journalists and citizens well equipped to discern true news from fake ones, and for contributing to the MIL and the building of peace in the country.