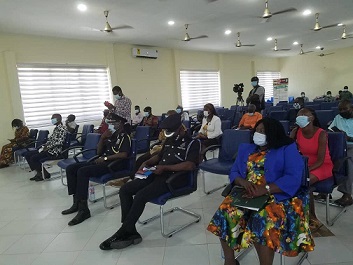 Transport Units and Departments of Institutions and Agencies operating a minimum of twenty vehicles would have to register and receive an operational license from the National Road Safety Authority (NRSA).

They would also have to be managed by a person with at least a first degree in Transport and Logistics or a related field belonging to a related professional body.

The transport Units would as well be required to file annual reports on their operations to the NRSA.

These are provisions under the new NRSA Act, 2019 (Act 993) to regulate and promote road safety in the country.

However, institutions such as the Driver and Vehicle Licensing Authority (DVLA), Police Motor Traffic and Transport Department (MTTD) as well as the National Security are exempted from this provision.

Mr Kwame Koduah Atuahene, Head, Regulations, Inspections & Compliance of the NRSA who made this known, mentioned road user indiscipline, institutional irresponsibility, and lack of institutional control by public transport operators and service providers as some major concerns regarding road safety in the country.

He was speaking at a regional stakeholder’s consultative meeting on their role in operationalising the Authority’s mandate, at Winneba.

It was attended by Coordinating Directors of selected Metropolitan, Municipal, and District Assemblies (MMDAs) and Managers of Transport Operators.

He said the NRSA was focusing on institutional fleets to ensure that transport officials of the institutions had the requisite training and as well become abreast with road safety standards.

Mr Atuahene also revealed that Road Transport Related Service Providers including vulcanizers, workshops/ mechanic shops, importers of Road Safety Equipment, Road Safety Auditors among others had to register and receive accreditation with the Authority before they could operate.

He said under the LI, the NRSA among others, would facilitate and enforce standards in road infrastructure, train and certify vulcanizers, as well as monitor activities of road sector agencies.

It also seeks to provide a framework for the coordination, regulation, implementation, and enforcement of road safety procedures, standards, and regulations.

Mr Atuahene, regretted that despite intensified public education, road accidents kept on increasing in the country and maintained that Authority would be better positioned to regulate and enforce standards in the transport industry and minimise crashes if the LI became operational.

He said NRSA existed to reduce the incidence of road traffic crashes, fatalities, and injuries through the promotion of road safety, development and coordination of road safety related Policies; and implementation and enforcement of standards for road safety.

Mr Atuahene called for concerted efforts by all stakeholders to ensure the safety and protection of lives by building a culture of institutional compliance.

He called on the media to collaborate directly with the Authority and desist from reporting false information to help reduce road accidents.