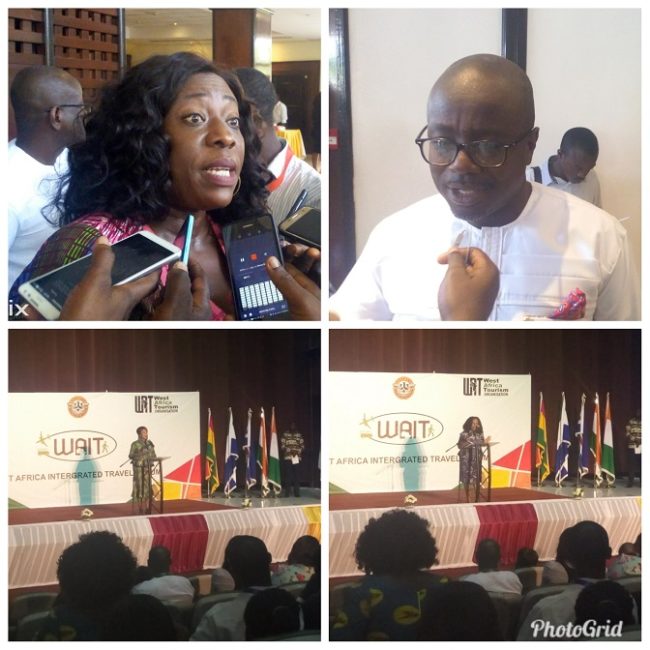 The Ministry of Tourism, Arts and Culture (MoTAC) has called on tourism authorities in the West Africa sub-regions to maximize returns in the sector through concerted efforts.

Speaking at the maiden edition of the West Africa Integrated Travel (WAIT) forum organized by the Ghana Tourism Authority in partnership with the West Africa Tourism Organization (WATO) in Accra, the Minister of Tourism, Hon. Catherine Ablema Afeku, and Member of Parliament for the Evalue Gwira Constituency in the Western Region, enumerated how the sector in 2017, contributed globally and significantly to job creation in the sub-region.

Saying, despite the ever-increasing and unpredictable shocks from terrorist attacks and political instability, to health pandemics and natural disasters, Travel and Tourism continues to show its resilience.

She also mentioned that, according the World Travel and Tourism Council (WTTC) in 2016, Travel and Tourism generated US$7.6 trillion, indicating 10.2% of global GDP and 292 million jobs which is also equivalent to one in ten jobs in the global economy.

And the sector, she said, accounted for 6.6% of total global exports and almost 30% of total global service export. Adding that, for the sixth successive year, the growth in Travel and Tourism outpaced that of the global economy.

The Minister also noted, the sub-region collectively welcomed over 5 million tourists, which generating over US$ 3.2 billion in revenue for the sector.

Mrs. Afeku however, lamented over the lack of vibrant value chain and linkages, which could reduce burdens on economies within the sub-region.

“By linkages, we mean integrated transport, aviation, travel and the free movement of people, goods and services within ECOWAS borders,” she said.

However, the failure to adhere to the ECOWAS protocol on the development of tourism, which recognizes the need to establish systems that facilitates travel within West Africa, still remains a key challenge to the tourism industry.

Nonetheless, she elaborated that, the adherence to the protocol could enhance effective destination marketing, and improved regional competitiveness.

“To achieve this, we need to take key lessons from other regional blocks such as East Africa and collate ourselves as a sub-region to work in close cooperation with each other to boost tourism arts and culture,” she mentioned.
On her part, the MD of GOTA Voyages in Benin, Mrs. Olanma Ojukwu, said corruption at the various borders for travel purposes has been one of the major challenges discouraging tourists and travelers.

She therefore called for a more collaborative efforts between tourism authorities in the sub-region, to curb the menace.

However, the Chief Executive Officer of the Ghana Tourism Authority, Mr. Akwasi Agyeman, also changed tourism authorities in the West Africa sub-region to identify key areas of integration, marketing and as well as best shared practices.

Meanwhile, Mr. Akwasi Agyeman called on governments of ECOWAS on the need to make policies that would harmonize the growth of domestic tourism in the various countries and the sub-region as a whole.

Cross River State Tourism: The Good, The Bad & The Ugly