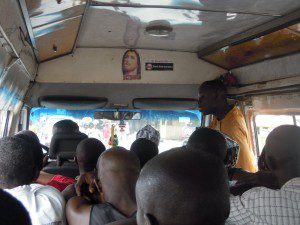 For merely challenging him over the arbitrary fare he was charging them when new fares were announced on Monday, February 1, 2106, the driver of Nissan Urvan Bus with registration No. GX 2705 – 13, plying between Dansoman and Nyamekye in Accra, had the guts to tell passengers to leave the country if they found life unbearable for them. “You talk too much you complain unnecessarily! If you think life here has become unbearable for you in the country, you can quit! But as for us, we shall live here,” he yelled arrogantly at passengers.

Information gathered by this reporter indicated that the cheating behavior of this driver is not an isolation, and that instead of complying with the 15% increment, drivers, especial those at Dansoman have capitalized on this to cheat passengers.

Our information has it that these fares emanated from the local GPRTU members, most of who own these tro-tro buses plying these routes.

Subsequently, when increases are made, they capitalize on the opportunity collecting fares that best suit them.

The question most Ghanaians are asking is “has Ghana become so lawless that anybody does what pleases him/her only to turn round to blame the President and his government?”

According to aggrieved passengers, the time has come for GPRTU members, especially those at Dansoman to be called to order to comply with the recent 15% increment, to avoid inconveniencing poor passengers.