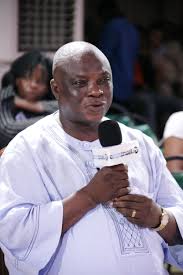 The Intelligent Youth Wing-NDC Afadzato South (IYAS) observes with regret the communication on a manipulative agenda by a few NDC stalwarts within the Afadzato South Constituency to disenfranchise the grass-root electoral base.

IYAS has gathered from very reliable sources that, the incumbent MP for the Constituency in the person of Hon. Joseph Amenorwode is scheming to either seek a re-election for the fourth time or impose his choice Madam Joyce Kotoku on the Constituency as his surrogate. IYAS is also in the known that, the incumbent MP, Hon. Joseph Amenorwode has devised means and ways including disqualification to intimidate any competent constituent, who is well placed from contesting the Afadzato South seat.

However, we want to put it on record that, the above including VOTE BUYING (the distribution of sewing machines, envelopes of monies meant for development projects, bags of rice, oil, cutlasses, fertilizers, bags of cement and roofing sheets) to delegates who constitute minority of the entire Afadzato South populace have been Hon. Joseph Amenorwode?s campaign modus operandi for the past 11 years. We also gathered from very reliable sources that, the incumbent MP, has ordered for over 75 TRICYCLES against the much awaited 2015 NDC PARLIAMENTARY PRIMARIES. IYAS condemns in no uncertain terms the campaign modus operandi adopted by Hon. Joseph Amenorwode for the past 11 years and without any sense of remorse or apologies, IYAS labels such acts as demonic, barbaric, petty and uncivilized.

We want to reiterate the point that, this unfortunate development does not only smack of backwardness, ungratefulness, greed, cowardice and gross incompetence on the part of Hon. Joseph Amenorwode but also inevitably betrays the incessant calls for efforts to deepen democracy in Ghana and Africa in general. The attitude of Hon, Joseph Amenorwode is a clear affront on the NDC?s internal democracy, the motive has the propensity to create a bad precedence within the Afadzato South which will ultimately destroy the democratic structures of the NDC Family and also have far-reaching repercussions for Ghana?s multi-party democracy, it is very unfortunate to say the least.

IYAS however believes that, Political Parties must begin to recognize that, Ghana?s strive to consolidate its democratic credentials can only thrive well when Political Parties themselves enhance their internal democracy through structures that promote inclusiveness and transparency of all that matter.

This by extension means that, IYAS believes in good governance because leadership is the compass that gives society a sense of direction that unifies all creative efforts into a common vision for the benefit of all and inspires people to work towards that vision.

IYAS also believes in a leadership that has the ability to influence the future by its decisions of today, a leadership that is concerned with the optimal development and growth of the resources in its hands including the people. It is against this background that we humbly craves the indulgence of the Executive Machinery of the NDC to secure the future of the Party by advising Hon. Joseph Amenorwode not to throw dust into the eyes of the delegates because this time around, the dead, the living and generations yet unborn are very conscious and will not kowtow to any of his demonic VOTE-BUYING PRANKS.

The Communications Machinery of IYAS wants to once again put it on record that, we are responsible for the defeats suffered by Hon. Joseph Amenorwode?s CLOSEST ALLIES and many other sponsored candidates in the Constituency Executives Elections held a few months ago. That was the first objective achieved and if Hon. Joseph Amenorwode fails to heed to our free advice, we will go an extra mile to ensure that, he loses miserably, that is if he decides to contest but if he decides to sponsor another TERRIBLE SEED, MADAM JOYCE KOTOKU, she will suffer the same fate because Afadzato South cannot continue to sow miserable seeds-Kofi Dzamesi (Bad Seed), Kosi Kedem (Ugly Seed), Joseph Amenorwode (Terrible Seed) and we have suffered enough for cultivating MISERABLE SEEDS, never again.

IYAS therefore wants to remind the Executive Machinery of the NDC that, the NPP has already presented a very competent candidate for the Constituency (name withheld for obvious reasons) and if our calls are not answered by the said date, stated in the 1st PRESS RELEASE, we shall descend into the gutters.

We repeat, HON. JOE AMENORWODE MUST GO for the following undisputable facts:

1. He is a very generous back seat warmer who has never made a statement on the Floor of Parliament for the past 11 years. This is not fair to us as a people because it is as a result of his commissions and omissions for the past 11 years that has led us into this abyss that we find ourselves today.

2. He once doubled as the Afadzato South MP and Volta Regional Minister but cannot pinpoint to any major project within the Constituency as his handwork, not even the community owned clinics were rehabilitated or refurbished under his tenure of office, not to talk of building hospitals.

3. The story behind the LEKLEBI SENIOR HIGH SCHOOL BOY?S DORMITORY is a very pathetic one and when he was confronted with such an important issue, honourable only reneged on his responsibility by suggesting that, the OLD STUDENTS of the school should contribute 20,000 GHC so that he can ?ASSIST? with 10,000 GHC. Let?s assume the money (30,000 GHC.) as suggested by Hon. has been raised, where on earth will such a SCHOOL?S BOYS DORMITORY cost such an amount? How much was offered to Hon. for rent? 50,000 GHC! YES, 50,000 GHC. for accommodation but did not see anything good in the provision of accommodation for the less privileged in school.
How much did he spend on his edifice along the VE-DEME-LEKLEBI FIAPE road? We consider his gesture as an insult to LEKLEBI SENIOR HIGH, THE OLD STUDENTS BODY, THE CHIEFS AND PEOPLE OF LEKLEBI TRADITIONAL AREA AND THE ENTIRE AFADZATO SOUTH. This is an evil-inclined gesture impregnated with ?LEKLEBI SENIOR HIGH CAN COLLAPSE? agenda. The same story (ready to collapse academic structures for teaching and learning) runs through AGATE SENIOR HIGH, LOGBA SENIOR HIGH & VE SENIOR HIGH though VE SENIOR HIGH can comparatively boast of better structures etc. including the JUNIOR HIGH SCHOOLS AND PRIMARY SCHOOLS, NOTHING LIKE DEVELOPMENT, just to say the least. IYAS wants to remind the NDC EXECUTIVE BODY that, it was during the NPP REGIME that, LEKLEBI SENIOR HIGH was blessed with the STOREY BUILDING currently known as LEKLEBI SENIOR HIGH GIRLS DORMITORY and a shame that, the NDC represented by Hon. Joseph Amenorwode could be so insensitive to the plight of the ordinary male students of the school. May the gentle soul of H.E. VICE PRESIDENT ALLIU MAHAMA REST IN PERFECT PEACE.

4. When he was confronted with the issue of lack of job opportunities for the youth be it driving, sewing, major projects for carpenters and masons and even assisting graduates with a scholarship package for further studies, Hon. Again without SHAME told the delegation that, ?jobs, jobs, jobs?this is a big issue now, not only in Ghana, it is the whole world?even my children have completed, yes they are graduates without jobs, they are always in the sun looking for jobs, so I am thinking of sending them for masters because that is beneficial since I spend so much on them at home than when they were in school?but as you said, I have been thinking and very soon I will address those issues. When the delegation got peeved with his response to such a sensitive issue, he shamelessly told them that, as for him, he has got what he wanted and nobody can take it away from him, they should go and think about their lives.

5. MP?s Common Fund, Scholarship for brilliant but needy students, portable drinking water, public toilets, hospitals, NO WAY, this is an MP who believes in BETTER LIFE FOR MY FAMILY, GOOD LIFE FOR THE DELEGATES & SELF-ENRICHMENT to the detriment of the ordinary Constituents, nothing like social amenities or social interventions for the poor and less privileged in the Constituency.

The past MP?s have performed abysmally and woefully underserved us, he was then begged to take over the mantle of leadership from the FAILED KOSI KEDEM, our current predicament is the price we paid for begging him to serve-this time around, we want competent Constituents to step out to serve with the spirit of service to humanity, we will not beg anyone again, never again. In a nut shell, the above represent some of the major concerns raised by over 1000 Constituents?Hon. Joseph Amenorwode has done his bid to serve us, abused the power of our thumb, he has failed us and must rescind every decision to impose himself on the Constituency for the 4th time or impose her preferred candidate, Madam Joyce Kotoku on us, it will not work and we can assure him, without mincing any word that, his plans are known and will be vehemently opposed by the blood of all those who should have been living by now but perished because of failed leadership, we resisted his schemes to impose Madam Edith Akpoto and Mr. Victor-Herman Condobrey on the Constituency and ready for the one brewing.

IYAS is calling on the NATIONAL AND REGIONAL EXECUTIVE BODY of our beloved NDC ( JULY 6, 2015 ) to intervene for us not to part ways with the Party since we are ready to do the needful? if our call is properly attended to, it will inure to the benefity of the NDC because we have the numbers, we vote, our brothers and sisters vote, our parents vote, our grand-parents vote, friends and sympathizers vote-SKIRT & BLOUSE is not even a last resort if not quickly addressed. At this point in time, IYAS wants to make a declaration that, it STANDS FOR COMPETENCE, DEVELOPMENT & THE TRUTH ONLY BECAUSE ONLY THE TRUTH STANDS THE TEST OF TIME and has no connection whatsoever to the camp of the incumbent DCE as gathered by the intelligent wing of IYAS a few days ago.

Mrs Angela Oforiwaa Alorwu-Tay is one person who finds herself in a dilemma, whether to resign as DCE and contest or acquiesce to the intimidation and death threats issued by the camp of Hon. Joseph Amenorwode ?any attempt to link IYAS to the camp of the incumbent DCE is an exercise in futility.

IYAS however cautions the incumbent DCE, Mrs Angela Oforiwaa Alorwu-Tay to be very vigilant and closely watch her steps because she finds herself in a very strategic position to serve her people that is if she really wants to serve and has no ulterior motive behind her acceptance speech.

IYAS has investigated and in the known that, the Afadzato South Constituency is yet to experience a major facelift since she accepted the challenge to serve in the capacity of District Chief Executive and currently in a state of disbelieve regarding the facts supporting her decision to resign as DCE and contest the MP SEAT.

It is very good at times to look into a bottle with both eyes open had it not being that, vision will be blared, we welcome her decision to contest but will scrutinize her in and out before lending our support since we are calling on other competent, well-educated and ready to serve Constituents to step out of their hide-outs to make the race a fiercely contested one in the history of Afadzato South, just to say goodbye to the UNOPPOSED STORY?but we pray that, the good Lord grants her victory if she decides to resign, JUST THAT, IYAS STANDS AGAINST ?GREED AND THE SPIRIT OF I?.