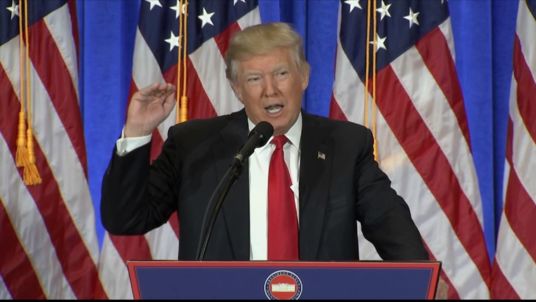 During U.S. President-elect Donald Trump’s first press conference on Wednesday, he battled reporters on Russian hacking and his business interests while shuning some media which he blamed for disseminating fake news. 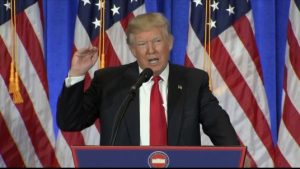 Trump made an effort to show that he is ready to become the commander in chief, finally accepting the conclusion reached by the intelligence community that Russia was behind the cyberattacks during the election campaign, and pledging to cut clean with his businesses to avoid a conflict of interest in the White House.

But he did not refrain from chastising the media for unfriendly reports, promising to punish news outlet Buzzfeed for publishing a questionable story and refusing to take questions from a CNN reporter which he accused of producing “fake news.”

The press conference, originally scheduled for December, was postponed, in Trump’s word, “because we were getting quite a bit of inaccurate news.”

Addressing the concern on how to avoid a conflict of interest between his public office and past business ventures, Trump said he will hand all his businesses to his sons, but will not liquidate his assets and put them in a blind trust, as his predecessors normally did.

Sheri Dillon, an attorney appointed to isolate Trump from this businesses, explained that the liquidation and a blind trust would be infeasible and ineffective to quell relevant concerns.

Instead, Trump’s investments and business assets have been or will be conveyed to a trust prior to Jan. 20, when he assumes the presidency, the attorney said.

The trust will operate without Trump’s influence and dictates that all deals should go through ethics vetting and there will be no foreign deals.

Trump “will only know of a deal if he reads it in the paper or sees it on TV,” Dillon said.

Both Trump and Dillon cited a legal clause that conflict of interest restrictions exclude the president, and that Trump is cutting his business ties “voluntarily.”

Facing questions on the hacking allegations in the presidential elections, Trump said “as far as hacking, I think it was Russia. But I think we also get hacked by other countries and other people.”

“He (Russian President Vladimir Putin) shouldn’t be doing it. He won’t be doing it,” said Trump. “Russia will have much greater respect for our country when I’m leading than when other people have led it.”

“Within 90 days, we will be coming up with a major report on hacking defense, how do we stop this new phenomena…because the United States is being hacked by everybody,” Trump said.

The press conference also touched upon Obamacare, a bill U.S. President Barack Obama considered a major part of his legacy.

“Obamacare is a complete and total disaster,” Trump said, adding “We’re going to be submitting, as soon as our secretary is approved, almost simultaneously–shortly after–a plan. It will be repeal(ed) and replace(d).” Enditem