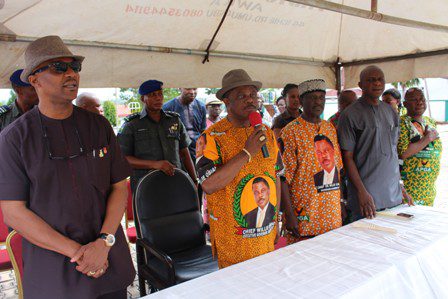 While our online prophets of doom continue to propagate their lies and ill sermon against the person of Chief Willie Obiano and his family, the Anambra State Government and Ndi Anambra, I wish to categorically state as follows: ? The reported closure of filling stations in some parts of Anambra State had nothing to do with high taxation as the rumour mongers would want us to believe
? The State?s Tax Force on Petroleum did their routine monitoring of some major petrol stations (prior to now, this committee gets compromised by the fuel vendors)
? It was discovered that virtually all the filling stations had doctored their fuel pump machines
? Depending on the illegal adjustment discovered, the fuel vendors were warned to desist from such criminal acts, forced to correct the illegality or reported to the relevant authorities
? The Task Force vehemently refused all entreaties by the defaulting fuel dealers to bribe or compromise them.
? It was discovered that some stations only give out 7litres when a customer pays for 10litres while others give out 8 for 10 litres.
? Citizens and customers at the various filling stations visited were happy that at last succour came their way
? The petrol station owners (through their criminal cabal) ordered closure of all member stations in protest
? The Government, from the minute the stations were closed, waved into the matter to protect the welfare of the Ndi Anambra
? Our renowned online preachers of failure swooped into the fray reporting High Taxation (which is non-existent in Anambra) instead informing the online users about the gallantry displayed by the Petroleum Tax Force in discovering the rot in our Filling Stations
? Today, with the effort of the State Government ably led by Chief Willie Obiano, filling Stations have been reopened, dealers won?t rob Ndi Anambra again and the Petroleum Task Force continues its statutory function as stated in the law book.

There are few facts to this development:

1. This Petroleum Committee has always underperformed (and are being regularly compromised) until Gov Obiano injected young and energetic citizens to regularly monitor and ensure that Ndi Anambra are not being robbed through the pump stations. And in their first official function, these shocking revelations where made? I commend them!
2. The Petroleum Task Force discovered that almost all the filling stations adjusted their pumps to rob Ndi Anambra to a wicked level? Imagine giving out only 7 litres when one pays for 10 litres.
3. Some cabals in the petroleum business felt hurt by the very inspiring and people oriented services of the young Task Force Team. Instead of being ashamed of the illegal and broad day light robbery to unsuspecting Ndi Anambra, they shut down their stations
4. Ndi Anambra are now aware that the Government of Chief Willie Obiano is ever determined to deliver on its promises and cannot be derailed by the activities of enemies of progresss.
?#?AnambraOnTheRise? as Willie is Willingly Working