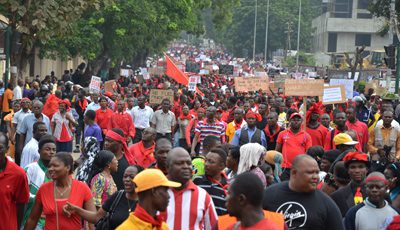 The Trades Union Congress of Ghana (TUC) has questioned the rationale for government’s hesitation to appoint a chairman for the National Labour Commission.

Dr Yaw Baah, Secretary General of the TUC, said they are wondering why government could not appoint such an important Commissioner after taking office almost one and a half years ago.

Dr Baah bemoaned the delay in appointing board members for the Labour Commission, Fair Wages and Salaries Commission, and National Pension Regulatory Body, among others.

He raised the issue on Thursday during a May Day symposium organized by the Tema District Council of Labour.

He explained that the absence of the Boards and Commissioners was hindering negotiations including the Single Spine Salaries for workers and existing pension issues.

He added that TUC had written to President Nana Addo Dankwa Akufo-Addo on the issue but that had yielded no result stating that the development was derailing past achievements of the Congress.

Dr Baah also asked government to properly equip state institutions such as the Labour Commission to enable then efficiently discharge their mandate to safeguard the interest of workers.

He observed that such institutions could not achieve much in their current state of need.

“National Labour Commission for instance has only one effective office in Accra. It is however bedeviled with lack of all the needed logistics that will ensure they do the work they are supposed to do,” he noted.

Touching on the theme for the May Day celebration, “Sustainable Development Goals and Decent Work, the Role of Social Partners”, Dr Baah said out of the 13 million Ghanaians who were eligible to work, only two million were in decent jobs.

He however regretted that instead of adding to the number, the mines were either laying people off or changing their status from permanent workers to temporal staff.

Professor William Baah-Boateng, an Economist and Associate Professor at the University of Ghana, in a presentation, said the Sustainable Development Goal (SDG) goal eight focused on decent work which was aimed at promoting inclusive and sustainable growth in employment.

Prof Baah-Boateng said the pillars of decent work was made up of employment generation, social protection, social dialogue and right at work.

He advised unions not to restrict their activities to only getting their share of the national cake, but rather support government with research and advocacy for policy formulation and implementation.

He also urged them to encourage the formation of more labour unions in all institutions to enable them have a stronger voice and larger numbers to influence governance.

Mr Ebenezer Kwadwo Taylor, Chairman of the TDCL, on his part, reiterated the need to equip government institutions especially the Factory Inspectorate Department as according to him without such logistics such establishments were non-functional.

Mr Taylor added that it was sad that the Factories Inspectorate Department has no vehicles to visit and check operational and health issues in factories, a situation he said, put the lives of workers in danger.