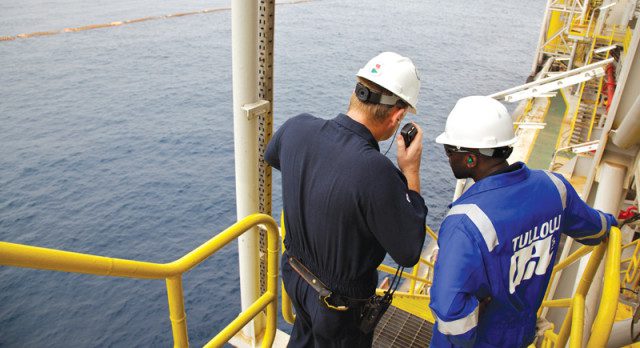 Tullow Oil was a faller on Thursday as the London market ended a four-day winning streak.

Tullow dropped 11.3 per cent to 169.8p after warning of a potential maintenance problem at its Jubilee field in Ghana, which is forecast to contribute nearly half of its first-half production.

The explorer said it was monitoring an issue with an external turret on the field’s floating storage vessel, which anchors the tanker to the seabed while still allowing it to turn.

Production was unaffected, Tullow said, but there was no guidance on the weather conditions that would require a shutdown, nor on how much loss would be covered by interruption insurance.

“At a time when cash flow from Jubilee is key to keeping net debt under control, investors are likely to feel nervous with this announcement and watch closely any potential impact on uptime for the field,” said FirstEnergy.

Tullow’s net debt is expected to peak at around $4.3bn ahead of its TEN development in east Africa coming on line in August, with a reserves-based loan needing renewal in early in 2017.

Themes were few beyond profit-taking into the week’s rally, which meant Anglo American fell 7.7 per cent to 432p and Rolls-Royce lost 2.5 per cent to 661p.

Housebuilders rallied ahead of the sector’s results season with Persimmon up 2.4 per cent to £20.45, Berkeley Group ahead 2.2 per cent to £33.67 and Barratt Developments taking on 2 per cent to 583.5p.

Canaccord Genuity saw Persimmon and Taylor Wimpey, up 1.9 per cent to 183.1p, as the most likely housebuilders to boost shareholder returns.

“Both have strong balance sheets which support higher dividends than currently committed to,” said the broker.

“Clearly the market expects this to a large extent but we would argue that there seems to be less expectation priced in for Taylor Wimpey, which trades at a discount to the sector and offers an already very attractive yield of circa 6.5 per cent for 2016.”

Indivior rose 15.8 per cent to 171p after it left 2016 guidance unchanged. Earnings from the heroin-substitute maker beat expectations due largely to a lower than forecast tax charge.

Wm Morrison edged 2.9 per cent higher at 186.7p on a reheat of speculation that it might be a target for a rival or a private equity consortium. But a report linking Permira to the bid theory looked to be wide of the mark.

“Whilst consolidation in some form is required, less rather than more supermarket space ultimately is required,” said Exane BNP Paribas.

On the idea of Morrison being taken private, Exane added that a bidder would need a credible exit plan to justify a price tag of around 28 times 2017 earnings.

While “asset stripping” would be an option given that Morrison owns 90 per cent of its store estate, “we’d question the property market’s appetite for so much single-user, single-use property coming its way,” it added.