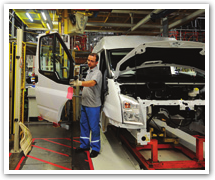 Turkey?s powerhouse automotive industry is expected to experience a downturn in 2014, as higher interest rates and a slowing economy cause domestic buyers to hit the brakes on spending. The outlook is likely to remain flat for the rest of the year, though solid exports may help offset some of the localised cooling in the market.

Sales of cars and light commercial vehicles slumped in the first quarter of 2014, dropping by almost 25% in the opening three months year-on-year (y-o-y), according to a report issued by the Automotive Distribution Association (ODD) on April 3. While car sales dropped from just over 114,000 in the first quarter of last year to 89,347 for the opening three months of 2014 ? a 21.9% decline ? the drop in commercial vehicle sales was steeper, down by 32% to 25,925 from 38,170.

Worryingly for producers, the downward trend in sales seems to be accelerating, with the number of vehicles rolling off Turkey?s lots in March down by 31% on the same month in 2013, following a y-o-y drop of 27.5% in February.

Among the reasons cited by the industry for lower sales are higher interest rates, introduced earlier this year by the Central Bank to try to halt capital outflows and the devaluation of the lira, and new government levies that pushed prices of most vehicles up. As of January 1, the special consumer tax on vehicles rose by between 5% and 15%, depending on engine capacity, the latest increase to a levy that was already between 45% and 145% of a vehicle?s roll-out price.

Added to this were more stringent credit requirements for buying a car, which came into force in February. Under the new regulations, issued by the Banking Regulation and Supervision Agency, new owners have to put down 30% of the ticket price, with loans limited to 70% of the value a new car, and all loans having a maximum 48-month repayment term.

With the market cooling, the ODD revised its domestic sales projection for this year. Having previously forecast sales of 1m units in 2014, the association is now giving a top end figure of 700,000 vehicles to be sold locally. However, Ford Otosan, one of Turkey?s larger producers, stated in a report issued in mid-February that it expected the sector to post total sales for 2014 at between 633,000 and 715,000 units, down on the 885,000 recorded last year.

Industry hopes for a bounce later in the year were dampened by the IMF, which on April 8 warned that the Turkish economy will slow more than previously expected. The fund said that growth for 2014 would be limited to 2.3%, well down on the 3.5% it forecast in October and only a little over half the 4% recorded in 2013. This lower rate of economic expansion, combined with interest rate rises and higher taxes, could sap buyer enthusiasm for this year, though IMF predictions of growth rebounding to 3.1% next year may serve to bolster sales in 2015.

Though it cut its expectations for the local market, Ford Otosan in February raised its forecast for overseas focused production, with the company saying it was looking to export sales of 195,000 units, up from its earlier projections of 192,000. This will not offset the sharp downturn in domestic turnover but exports do represent a solid base from which the firm can maintain production and earnings.

While manufacturers are adjusting their expectations for domestic sales, the outlook for the export trade overall is much stronger. In March, Turkish producers shipped parts and vehicles worth $2.1bn, the industry?s best result since September 2008, according to data released by the Uludag Automotive Industry Exporters Union (OIB) on April 8. The March result was a 14% improvement y-o-y, while the cumulative export earnings of $5.5bn for the quarter were 8% up on the same three-month term in 2013.

Much of the growth was driven by rising sales to the European market, which posted a 22% increase for March, with 74% of total automotive exports going to the continent. The stronger momentum in exports meant that the automotive sector was well placed to achieve the targeted earnings of $23bn in overseas sales, OIB chairman Murat Sabuncu said when releasing the report on the industry?s first-quarter performance.

There may be some respite over interest rates, if the Central Bank decides on a reduction that could stimulate consumer spending, including on large ticket items such as vehicles. However, even if rates are eased it is unlikely this will spur a surge in domestic sales. At best, such a move is expected to flatten the sharpness of the downturn. Those companies with a strong export component to their marketing will probably enjoy a better year in 2014 as long as the modest recovery in Europe continues.