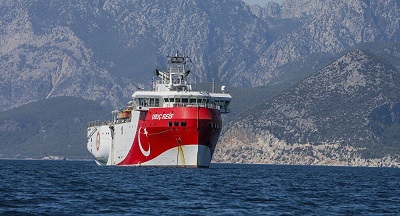 Turkey has extended by 10 days the controversial use of its gas exploration ship Oruc Reis in a part of the eastern Mediterranean that has brought it into dispute with neighbouring Greece and the wider European Union.

The Turkish naval authority announced on Sunday that seismic investigations will be carried out south-east of the Greek island of Rhodes until November 14.

Turkey had sent the Oruc Reis back to the eastern Mediterranean in mid-October to look for natural gas there, and thus rekindled a dispute with Greece. The mission has been extended several times and was due to expire on November 4.

Greece accuses Turkey of illegally exploring deposits off its islands.The government in Ankara, however, rejects
the allegations and takes the position that the waters belong to the Turkish continental shelf.

The European Union threatened last month to impose further sanctions on Ankara over the dispute, which has also created tensions in the NATO defence alliance, which Turkey is a member of.