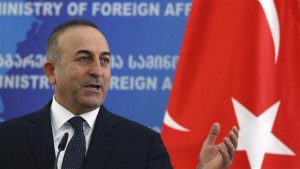 Turkish Foreign Minister Mevlut Cavusoglu says the US should break ties with Kurdish fighters, adding “resorting to terrorist groups like the YPG is above all a sign of weakness.” Cavusoglu accused the United States on Friday of making conflicting statements about the Syrian Kurdish YPG fighters which, Ankara says, were working with members of the outlawed Kurdistan Workers Party (PKK).

“Resorting to terrorist groups like the YPG in the fight against Deash in Syria is above all a sign of weakness,” he said in Tbilisi while on an official visit to Georgia.

Turkish leaders have accused YPG of being behind a car bombing in Ankara that killed 28 people late Wednesday.

The United States has said it does not consider the YPG a terrorist group, enraging Turkey which fears advances by the militia in northern Syria would stoke separatism among its own Kurdish community.

On Thursday, the US State Department called on Turkey to stop shelling of the YPG which has denied being behind the Ankara bombing.

Turkish shelling of Kurdish positions in Syria has complicated the already convoluted situation in the conflict.

On Thursday, Prime Minister Ahmet Davutoglu accused the Syrian government of being directly responsible for the bombing in Ankara, saying Turkey will continue to shell Kurdish positions inside the Arab country.

In a live television speech, Davutoglu said the Ankara bombing showed that the YPG was a terrorist organization and that Turkey expected cooperation from its allies against the group.

The leader of the Syrian Kurdish Democratic Union Party denied the accusation, saying Ankara was making the allegation in order to escalate the conflict in Syria.