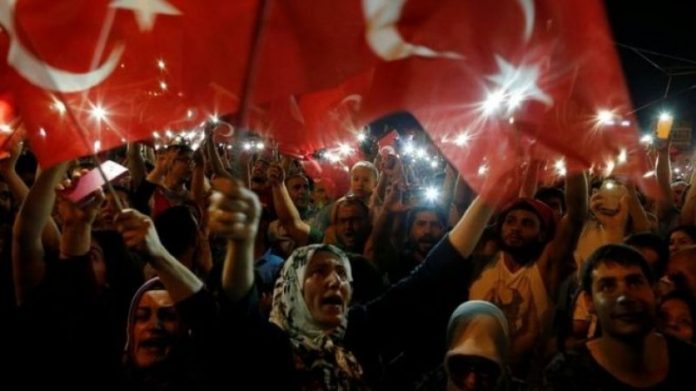 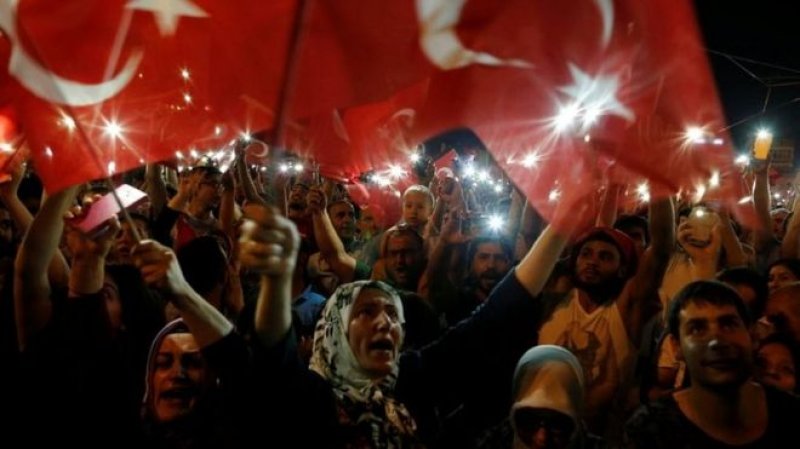 Large crowds have gathered in Istanbul and other cities after calls by Turkish authorities to defend democracy following the failed military coup.

Less than 24 hours earlier thousands had turned out to help quash the plot.

Nearly 3,000 soldiers have been detained and some 2,700 judges sacked as the government re-asserts power.

Generals are reported to be among those detained.

Official figures put the number of civilians and police killed at 161, while 104 soldiers involved in the coup also died. The number of injured was 1,440.

US Secretary of State John Kerry urged the Turkish authorities to respect the rule of law during their investigations into the coup attempt.

Mr Kerry also warned Turkish Foreign Minister Mevlut Cavusoglu that public suggestions the US had a role in the plot were “utterly false” and harmful to relations.

The US also says that Turkey must provide evidence before any extradition of Fethullah Gulen could be considered.

The attempted coup happened because Turkey is deeply divided over President Recep Tayyip Erdogan’s project to transform the country and because of the contagion of violence from the war in Syria.

President Erdogan and his AK Party have become experts at winning elections, but there have always been doubts about his long-term commitment to democracy. He is a political Islamist who has rejected modern Turkey’s secular heritage. Mr Erdogan has become increasingly authoritarian and is trying to turn himself into a strong executive president.

From the beginning Mr Erdogan’s government has been deeply involved in the war in Syria, backing Islamist opposition to President Assad. But violence has spread across the border, helping to reignite the fight with the Kurdish PKK, and making Turkey a target for the jihadists who call themselves Islamic State.

That has caused a lot of disquiet. Turkey has faced increasing turmoil and the attempt to overthrow President Erdogan will not be the last of it.