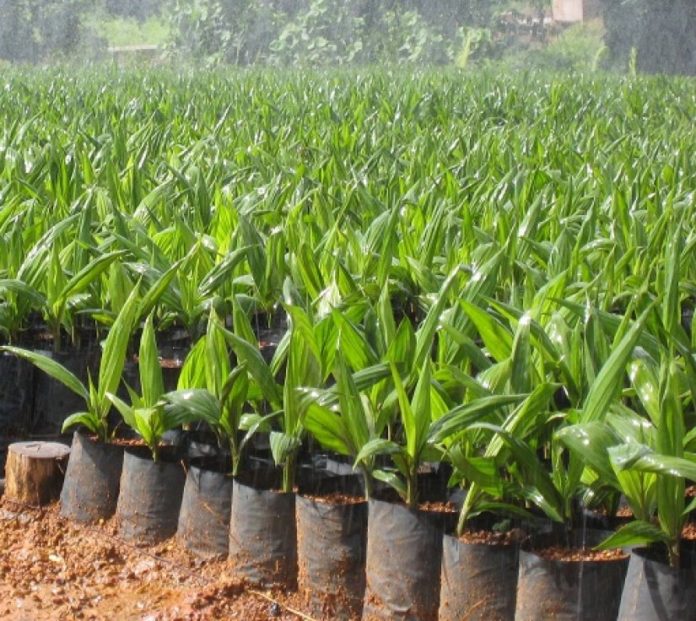 More than 50,000 hybrid oil palm seedlings have been distributed to hundreds of farmers in the Twifo-Attimorkwa District of the Central Region.

The distribution of the seedlings, which is an initiative under the tree-crop module of the Planting for Food and Jobs (PFJ), is meant to create more employment and to facilitate development, particularly at the local level.

The tree crop module of the PERD has been designed with a focus to develop selected tree crops, such as cashew, coffee, oil palm, coconut, mango and rubber for export.

It is being implemented by the Ministry of Food and Agriculture (MOFA) in collaboration with the Local Government Ministry across the country.

It forms part of government’s plan to provide additional revenue to farmers to improve their welfare.

At a ceremony to distribute the seedlings to farmers at Twifo-Praso, Mr Robert Agyemang Nyantakyi, the District Chief Executive (DCE), announced plans by the Assembly to collaborate effectively with the Twifo Oil Palm Plantation (TOPP) to scale up production of quantities of oil palm seedlings to farmers.

He said the first phase of the programme seeks to supply quantities of the seedlings to all interested farmers to significantly boost their income generation to improve their livelihoods.

Mr Nyantakyi said the distribution of the seedlings would be devoid of partisan considerations and favouritism but given to all competent people who need them.

In this regard, he said, officials from the Department of Agriculture are involved to monitor the farmers to ensure that they planted the seedlings to derive the maximum benefit.

Mr Kwamena Duncan, the Central Regional Minister, who was on hand to supervise the distribution commended President Nana Addo Dankwa Akufo-Addo and the DCE for the initiative.

He said government recognises the contributions of the agricultural sector to the growth of the economy and would continue to pursue policies and programmes that would develop the sector for the benefit of the nation.

“The agricultural sector is the backbone of the country’s foreign exchange earnings and government will continue to roll out interventions to increase the country’s earnings abroad,” he stressed.

Mr Duncan urged the farmers to make good use of the plants to help them put money in their pockets and also help feed the country.

They should employ the best farming practices to increase their yield and further warned them against not using the seedlings for the stated purpose.

Mr Alfred Ampaw Otoo, the District Director of Agriculture, also commended the DCE for the project which would enhance oil palm production in the area.

He added that “the Municipal Assembly was undertaking such an important venture so that oil palm will be abundantly available within the next few years to feed the factory to enable it to produce to full capacity”.

Some beneficiaries praised President Akufo-Addo, management of TOPP and DCE for the gesture and pledged their support to sustain the project.

Garden set up for Basic Schools in Akatsi South