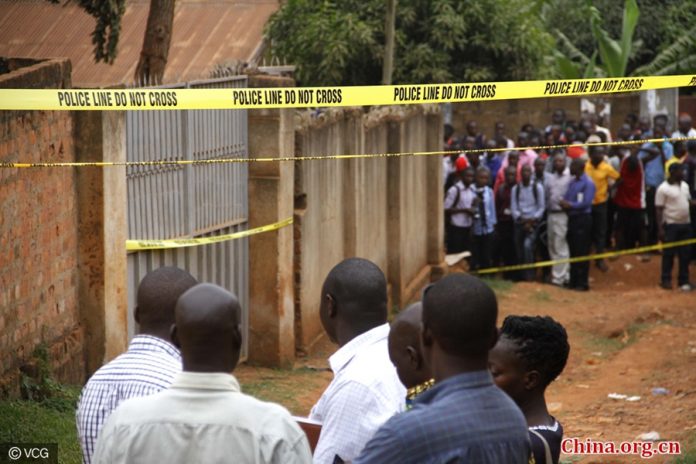 Residents of the neighborhood gather at the crime scene to watch the police investigation. [Photo/China.org.cn]

Two Chinese women were found dead in Makerere Kikoni, a neighborhood in the Ugandan capital of Kampala on Wednesday morning. The decomposing bodies of the two women were discovered in a rented house there, with each bearing a stab wound, according to local reports. The police said they are treating the cases as murder, reports say.

Local detectives were quoted by Chimpreports.com, a Kampala-based news website, as saying the two women were first kidnapped, killed and later dumped into the house where their bodies were found.

The Chinese embassy in Uganda issued two notices on Feb. 14 and 15 on its website saying it had received a report of a serious criminal case in which two Chinese nationals were killed, without giving further details.

Chimpreports.com quoted Ugandan Inspector General of Police Kale Kayihura as saying the Chinese embassy reported on Saturday that two females had gone missing. The two were revealed to be Ren-Ju, 33, working with Club 7 restaurant in Kololo as a waitress and Sang-Weng Wa, 34, also a waitress at Chinese Business Hotel in Bugolobi.

Kampala police are holding a special hire driver in the investigations, Chimpreports.com said, “[the] special hire driver who is in police custody is said to have been hired by an unknown Chinese man from Chez Johnson hotel in Nakulabye to Club 7 Restaurant in Kololo where they picked Ren-Ju and brought him to the said house.”

The house was previously used as a church until last week when the Chinese national, who detectives say they are treating as a suspect, rented it. It is suspected that the two women were stabbed by the man, who is on the run.

The local police were also quoted as saying that they have started tracking the phone number that the Chinese suspect used to send a WeChat message asking for ransom to release the suspects. Karihura said the clues indicate that the dead could have been targeted and followed from China to Uganda before being cornered and killed. He also said the two could have been killed between Saturday and Monday as the bodies had started to rot by the time they were recovered on Wednesday.

According to local news website The Ugandan, at least two people are violently killed in the shanty town Kikoni almost every week.