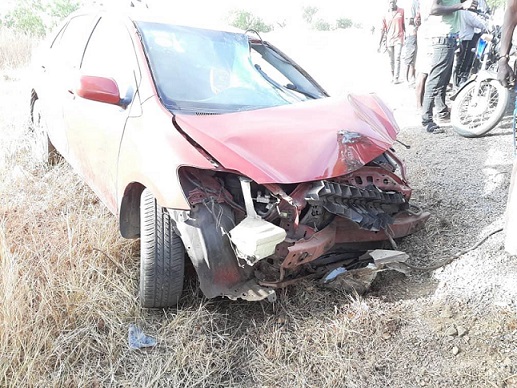 The Nanjupiung community in the Builsa North Municipality of the Upper East Region has recorded two consecutive accidents in two days leading to the loss of lives.

The Chuchuliga-Navrongo road which is tarred and has fresh chippings on it, passes through the Nanjupiung community, the first town from Navrongo, and slopes towards Chuchuliga.

On Friday morning, the Ghana News Agency (GNA) chanced an accident involving a Toyota Yaris car with registration number GC 2543 -19 moving towards Chuchuliga and a motorbike from the Nanjupiung community to join the main road.

Apart from the recent accident, which left three of the victims, especially the motorbike rider and a female pillion rider in critical conditions, similar accidents occurred on Thursday.

One of the vehicles with registration number AS 8749 – 10 involved in the previous accident was damaged and packed by the road at the same spot at Nanjupiung, where Friday’s accident occurred.

In an interview with the GNA at about 30 metres away from the accident scene, Nab Ayapelim Agonchi, the Chief of the community said “The accidents on this stretch of road are unbearable. These accidents have resulted in several deaths.

“When vehicles are descending the hill, they move with speed because this portion of the road is good. Yesterday, we witnessed one accident and today, another one has occurred. We need speed ramps or else there will continue to be accidents on this road,” he said.

According to him, even though several complaints were lodged at the Municipal Assembly and appeals for speed ramps on the road, the Assembly was yet to act on the situation.

“There are schools along the road and we have school children often crossing the road. If we had about five or six speed ramps, it will reduce the speed of vehicles so that we can also have our peace of mind in this community.”

As at the time the GNA left the scene, the Navrongo Central Constituency ambulance had conveyed the victims to the War Memorial Hospital, while officials of the Ghana Police Service also conveyed the motorbike and some parts of the vehicles to the Chuchuliga Police station.