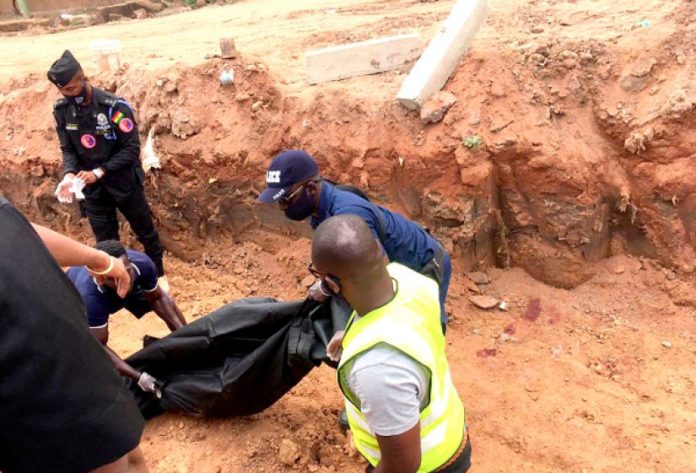 Two construction workers have died at Ashongman Estates from injuries they sustained from being hit by a collapsed fence wall.

They have been identified as Richard Ankrah and Richard Darko. Their colleague, Tommy Dogbenu, is also in critical condition, receiving treatment at the Ashongman Community Hospital.

Deputy Superintendent of Police (DSP) Effia Tenge, Head of the Public Affairs Unit of the Accra Regional Police, confirmed this to the Ghana News Agency, in an interview on Saturday.

She said on June 5, 2020 at about 0800 hours, the Police received a distress call that a wall had collapsed on some workers at a road construction site at Ashongman Estates

“A team proceeded to the scene and found a male adult whose name was given as Richard Ankrah lying dead in a gutter under construction,” DSP Tenge explained.

“Two other workers, including Darko, were said to have been rushed to the Ashongman Community Hospital, but Darko died shortly on arrival.

“Information received from the Hospital explained that Dogbenu, 36, who was seriously injured, has been transferred to the 37 Military Hospital”.

She said the debris of the collapsed wall of the private house were still in the gutter or drain.

DSP Tenge said the bodies had been deposited at Police Hospital mortuary for autopsy.

Meanwhile, two other houses whose walls were affected by the road construction, have since been pulled down by the Municipal NADMO officials to avert any more calamity.