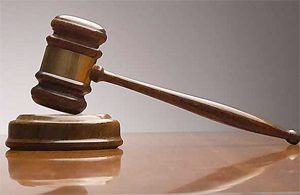 Two taxi drivers were on Monday remanded by an Accra Circuit Court for conspiracy to commit crime and robbery. The two, Victor Kwadwo Sablah and Kweku Appiah, were said to have conspired and robbed one Essien Mishasha of her two mobile phones, worth GHc900.00, a pair of ladies shoes worth GHc50.00, National Health Insurance Card, Driving license, house keys and an amount of GHc625.00.

They were remanded into police custody by the court presided over by Mr Francis Obiri to re-appear on September 30.

Police Chief Inspector Kwabena Adu told the court that the complainant is a student and stays at East Legon, while the accused persons are taxi drivers residing at Dansoman.

He said on July 26 at about 0450 hours, the complainant and her sister chartered a taxi with registration number GW6754-13 from Osu to East Legon.

He said on reaching a dark place at East Legon at about 0525 hours and while the taxi was in motion, someone emerged from the booth of the taxi with a knife and threatened to kill them if they failed to surrender all items on them.

The Prosecution told the court that in the process they were robbed of the above listed items and were subsequently thrown out of the taxi, but the complainant managed to take the registration number of the taxi and reported the matter to the police.

He said on September 5, Victor, the driver of the taxi was arrested and during interrogation stated that he is the driver of the said taxi but on the day and time of the incident, he was not the one using the taxi.

Police Chief Inspector Adu said Victor revealed that he travelled to Koforidua on July 18, and gave the taxi to Kweku to drive and that he received the taxi back on the July 28 after the offence has been committed.

He told the court that Kweku was arrested and he also confirmed that the taxi was in his custody as stated by the driver but on July 25 at about 1500 hours Victor came and collected the taxi from him to pick his customer and to return it on July 26 at 0900 hours.

The prosecution said, Victor admitted having taken the said taxi from Kweku as a spare driver on July 25 at 1500 hours but returned it on the same day at about 2200 hours.

Electrician, 44, in court for defilement

Driver sentenced to 10 years for stealing