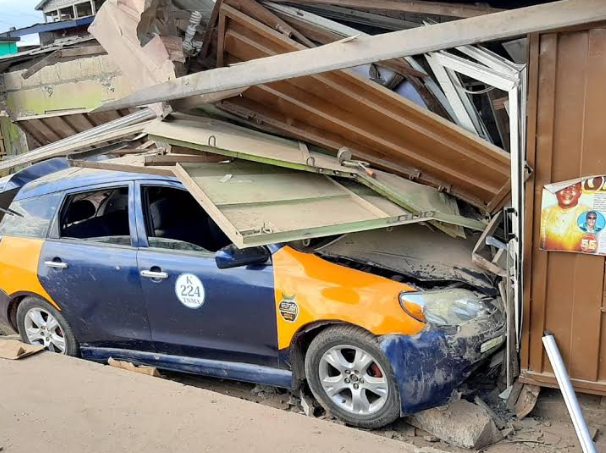 A 55 year-old taxi driver, Peter Asare and a passenger narrowly escaped death when the vehicle they were traveling in rammed into a container store at Akyempim.

The driver and passenger however did not sustain any injury after the accident. An investigator of the Tarkwa Motor Transport and Traffic Department (MTTD), Chief Inspector George Kwabena Osei, confirmed the incident to the Ghana News Agency at Akyempim.

He said on Wednesday May 13, at about 1330 hours, Asare was driving a Toyota Matrix taxi cab with registration number GR9260-17 and had a passenger on board from Tarkwa Township towards Akyempim.

Mr Osei explained that when he got to a section of the road near Crown fuel station at Akyempim on the Tarkwa-Takoradi Highway, he veered off the road and bumped into a container store.

He said the vehicle was tested by the Driver Vehicle and Licensing Authority (DVLA) and released to the owner, adding that, the driver was assisting the police to investigate the case.

Death Toll From Blasts in Somalia’s Capital Rises to 100; Over 300 Injured