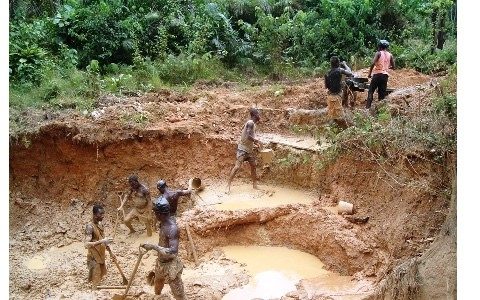 Two out of three illegal miners who were trapped in a mining pit has died at Manso Datano in the Manso Edubiase District of Ashanti.

The two unidentified persons believed to be in their 30s, who were rescued from the pit on Monday, May 11, at about 1150 hours were pronounced dead on arrival at the Tontokrom Health Centre.

Their bodies have since been deposited at the St Martin’s Catholic Hospital’s Morgue at Manso Agroyesum for preservation, identification and post mortem.

He said the third person who was very weak at the time of rescue is receiving treatment.

The Station Master said at about 1220 hours on that fateful day, Yaw Akowuah and Kwadwo Asanfo, both Committee Members of Manso Tontokrom brought the deceased in a taxi cab with the registration number GT 8906- 18, to lodge a formal complainant.

Chief Inspector Amartey said the complainants said they had a call that three of the illegal miners had been trapped at a Galamsey site in a pit they were working in.

He said when the complainants arrived at the site, they realised that their colleagues had rescued them with the two being unconscious and the other weak.

He said they rushed them to a health centre, where the two were pronounced dead by a medical officer.