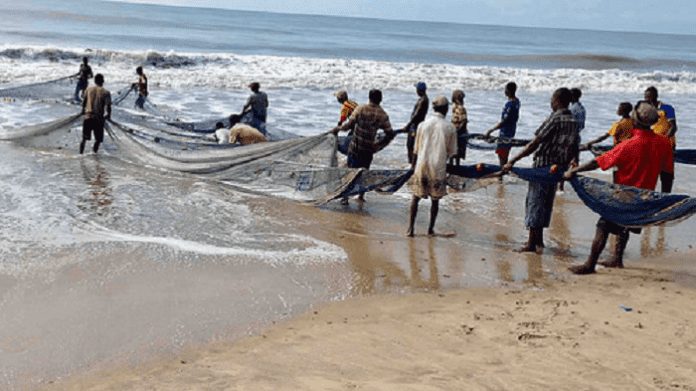 The Environmental Justice Foundation (EJF) and Hen Mpoano, implementing partners of the “Far Dwuma Nkodo” project have carried out extensive mapping on fish landing sites along the coast of Central, Greater Accra and Volta regions.

The move is to help support spatial planning and secure the landing sites for fishing communities in the context of coastal development.

Mr Socrates Segbor, the Fisheries Programmes Manager of EJF, said the project would address aspects of governance such as how to ensure access to fishing grounds and landing sites for small scale fishers in the face of competing priorities.

So far, 15 landing site maps have been sampled and composed into billboards with eight by four feet dimensions across 15 landing sites in the three beneficiary regions.

The maps were done after engagement with the chief fisherman and the Traditional Council with a land lease agreement signed, boundaries verified, site plan produced, indenture prepared detailing the size and use of the land for fishing related purposes.

Additionally, a short guidance document has also been prepared to explain the registration process and disseminated to traditional authorities, chief fishermen and fisher-folks to assist in securing landing sites.

Mr Segbor said a signed indenture was handed over to the British Komenda Community and fisher-folks as a proof of ownership.

He said British Komenda was selected as the case study for the pilot project due to potential threats arising from planned works under the sea defense and Erosion project and associated tourism and other development, which may compete with existing usage of the beach front.

The Far Dwuma Nkodo project, he said was promoting the implementation of international best practices for securing tenure rights and access to resources for artisanal fishers enshrined in the UN FAO’s Voluntary Guidelines on Responsible Governance of Tenure of Land, Fisheries and Forest in the context of national food security.

He said the project would continue to build the capacities of community leaders to advocate for their informal yet legitimate tenure rights in accordance with the Voluntary Guidelines on the Responsible Governance of Tenure where securing landing sites through formal land registration may not be feasible.

Mr Roberto Schiliro, Team Leader and Head of the Sector Infrastructure and Sustainable Development Section, EU Delegation in Ghana, expressed satisfaction with the progress of the project.

He said coastal development on landing sites often prevented fishers from accessing fishing grounds that were crucial to their viability, presenting serious infringement on their legitimate tenure rights.

The Far Ndwuma Nkodo project has, since 2017, been working to secure greater environmental sustainability and social equity in Ghana’s fisheries sector by building capacities of fishing communities in the sustainable management of their resources and supporting efforts to reduce illegal fishing.