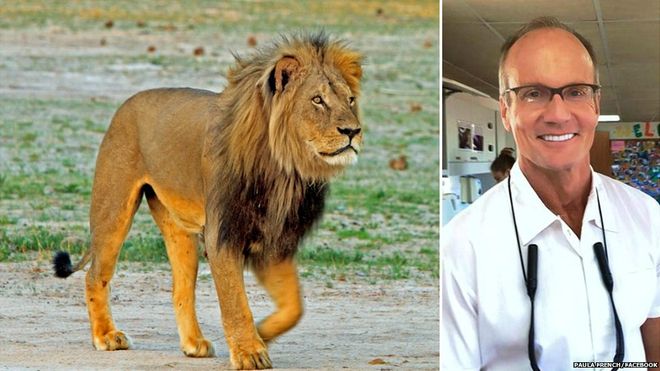 Walter Palmer, who killed Cecil, said he had no idea the lion was a ?local favourite?

Professional hunter Theo Bronkhorst and farm owner Honest Ndlovu, are charged with poaching offences for not having the required hunting permit.

US dentist Walter Palmer shot the animal with a crossbow and rifle outside Hwange National Park.

Police say Mr Palmer, who claims he was unaware of the lion?s identity, could also face poaching charges.

The two Zimbabwean men, who accompanied him on the hunt, will appear in court in Victoria Falls, and could face up to 15 years in prison if found guilty.

Mr Palmer says he regrets shooting the well-known animal and believed he was on a legal hunt, saying he relied on professional guides to find a lion and obtain the necessary permits.

Separately, court records have shown that the dentist has a felony record in the US after killing a black bear in the state of Wisconsin in 2006.

He was given a one-year probation and fined $3,000 (?1,900), having shot the animal outside an authorised zone and then trying to pass it off as having been killed elsewhere.

Records from the Minnesota Board of Dentistry also show that Mr Palmer was the subject of a sexual harassment complaint which was settled in 2006.

A receptionist alleged that he had made indecent comments to her. Mr Palmer admitted no wrongdoing and agreed to pay out more than $127,000 (?81,000).

?An activity I love?

Cecil the lion was skinned and beheaded, according to the Zimbabwe Conservation Task Force (ZCTF), a local charity.

Mr Palmer insists that he believed his guides had secured ?all proper permits? for the hunt.

?I relied on the expertise of my local professional guides to ensure a legal hunt,? he said in a statement on Tuesday.

He said he had not been contacted by authorities in Zimbabwe or the US but would ?assist them in any inquiries they may have?.

The dentist is believed to be back in the US, although his exact whereabouts are unknown.

?Again, I deeply regret that my pursuit of an activity I love and practise responsibly and legally resulted in the taking of this lion,? he said.

The dental practice run by Mr Palmer was closed on Tuesday and a note was placed on the door referring visitors to a public relations firm.

The practice?s Facebook page was removed from the site after being besieged by angry comments and the company website was also taken down.

Zimbabwe, like many African countries, is battling to curb illegal hunting and poaching which threatens to make some of its wildlife extinct.

The 13-year-old lion was a major tourist attraction at the country?s famous Hwange National Park.

He is believed to have been killed on 1 July but the carcass was not discovered until a few days later.

The ZCTF said the hunters had used bait to lure him outside Hwange National Park during a night-time pursuit.

Mr Palmer is said to have shot Cecil with a crossbow, injuring the animal. The group did not find the wounded lion until 40 hours later, when he was shot dead with a gun.

The animal had a GPS collar fitted for a research project by UK-based Oxford University that allowed authorities to track its movements. The hunters tried to destroy it, but failed, according to the ZCTF.

On Monday, the head of the ZCTF told the BBC that Cecil ?never bothered anybody? and was ?one of the most beautiful animals to look at?.

The six cubs of Cecil will now be killed by the new male lion in the pride, Johnny Rodrigues added, in order to encourage the lionesses to mate with him.

?That?s how it works? it?s in the wild. It?s nature taking its course,? he added.

About a century ago there were around 200,000 lions roaming across Africa but that figure has dropped to less than 30,000 in recent years.

Hunting lions is legal in several countries in southern Africa, including Zimbabwe, but groups must obtain a valid permit from authorities.