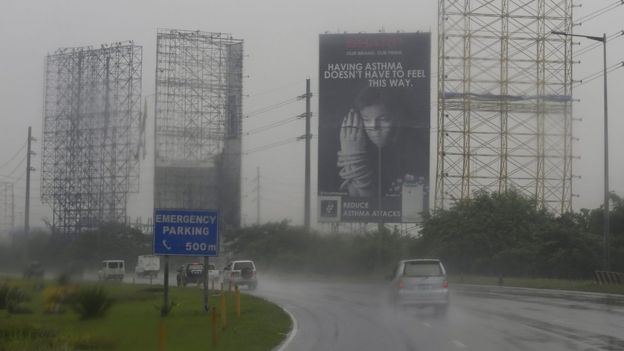 Billboards were removed as winds increased in Bulacan province, Luzon

The slow-moving typhoon made landfall near the town of Casiguran on the main island of Luzon on Sunday morning.

Alexander Pama, head of the government?s main disaster agency, said 10,000 people had been displaced in north-eastern Luzon but no casualties had been reported so far.

?Initially, we are getting [reports that] many houses were destroyed, power lines toppled and trees blocking major roads,? he said.

The eye of the storm was moving west at a speed of just 3km/h (2mph).

?It has slowed almost to a crawl. We were hoping it would speed up and spare us sooner,? Mr Pama added.

Flights and ferry services in the north have been cancelled and some bus services in mountain areas suspended due to the threat of landslides.

On Friday, President Benigno Aquino made a televised warning, the first time he had done so since Super Typhoon Haiyan in 2013, which killed more than 6,300 people.

BBC science editor David Shukman, who is in the capital Manila, says public warning systems have been greatly improved since Typhoon Haiyan, so there is a much better chance of keeping people safe.

Typhoon Koppu, also known as Lando, is producing winds of up to 250km/h (155mph) and is slow moving, meaning it could bring intense rain over a long period of time.

?Soldiers with bull horns were going around coastal villages forcing people to flee,? Vir Malabanan, a resident told Reuters by phone from Santiago, in Isabela province.

?We?ve been experiencing heavy rain and strong winds for hours. We no longer have power in the province, so we rely on radio sets for news.?

Rain has also reached the capital Manila, though winds are not expected to be strong enough there to cause damage.

In his televised appeal on Friday, President Aquino urged the estimated six million people in the typhoon?s direct path to listen to government warnings and be ready to evacuate their homes if necessary.

?Your government is here to help us achieve zero casualties,? Mr Aquino said.

Meanwhile, the Philippine military in northern Luzon has been placed on alert for disaster operations.

Typhoon Koppu is not due to leave the Philippines until Tuesday, when it will be heading towards Taiwan.