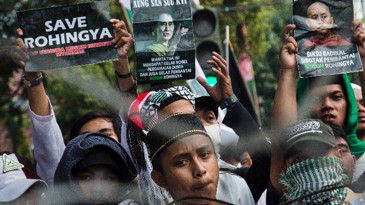 The International Court of Justice ruled Thursday that Myanmar’s treatment of its Rohingya Muslim minority constitutes genocide and ordered it to immediately halt such actions.

In its unanimous decision, the highest judicial body of the United Nations agreed with an urgent complaint brought by the West Africa nation of Gambia that contends Myanmar’s treatment of Rohingya breached its obligations under the 1948 Genocide Convention, thus giving the court jurisdiction to intervene.

The decision, hailed as momentous by human rights advocates, means Myanmar must take immediate “provisional measures” to cease ongoing violations against Muslim Rohingya. It ordered the Asian nation to halt “any attempt to commit genocide” and preserve all evidence of genocidal crimes.

The court rejected Myanmar’s claims that no obvious genocidal intent has been proven and ruled that 600,000 Rohingya remaining in Rakhine state — after an estimated 730,000 fled to Bangladesh as refugees — are “extremely vulnerable” and still face imminent threats of death, torture and sexual violence from military forces.

Refugees arriving in Bangladesh told officials that security forces in 2017 launched a campaign of ethnic cleansing, including killings, arson, enforced disappearances, extortion, severe restrictions on movement and lack of food and healthcare.

They also reported sexual violence and abductions of women and girls in villages and checkpoints along the route to Bangladesh. Returnees to Myanmar faced arrest and torture by authorities, they said.

The ICJ ruling amounts to a rejection of a claim last month by de facto Myanmar leader Aung San Suu Kyi that — while security forces may have been responsible for war crimes and “disproportionate use of force” — there was no evidence of genocidal intent.

“Today’s decision sends a message to Myanmar’s senior officials: The world will not tolerate their atrocities, and will not blindly accept their empty rhetoric on the reality in Rakhine State today,” Amnesty International Regional Director Nicholas Bequelin said Thursday.

“The ICJ order to Myanmar to take concrete steps to prevent the genocide of the Rohingya is a landmark step to stop further atrocities against one of the world’s most persecuted people,” added Param-Preet Singh, associate international justice director at Human Rights Watch.