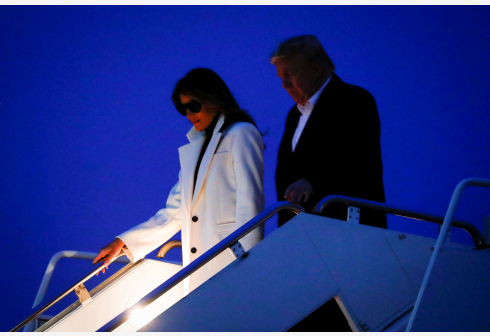 Speaking from the newly renovated Rose Garden, Melania Trump reflected on some of her personal experiences as first lady, discussed her “Be Best” campaign — a public awareness initiative focusing on children, and sought to make the case why her husband deserve a second term.

“My husband knows how to make real change,” she told the audience, including Trump, adding that she’s “proud to see the many things he has done in such a short time.”

Unlike other RNC speakers who had largely ignored the coronavirus pandemic, which has killed more than 178,000 people in the United States, or had referred to it in the past tense or with political rhetoric, Melania Trump offered comfort to families suffering during the public health crisis.

“I want to acknowledge the fact that since March, our lives have changed drastically. The invisible enemy, COVID-19, swept across our beautiful country. And impacted all of us,” the first lady said.

“My deepest sympathy goes out to everyone who has lost a loved one and my prayers are with those who are ill or suffering,” she continued. “I know many people are anxious and some feel helpless. I want you to know you are not alone.”

Melania Trump, 50, is a native of Slovenia and only the second foreign-born first lady in U.S. history. Before Tuesday, she had stayed away from the 2020 trail. The RNC speech marked the first time in a long time that she’s back in campaign mode.

She was also tasked with helping her husband appeal to women voters.

“Donald is a husband who supports me in all that I do,” Melania Trump said. “He has built an administration with an unprecedented number of women in leadership roles.”

Donald Trump made additional appearances in two pre-taped videos aired Tuesday night during the virtual RNC. In one of them, the president issued a pardon for a man who robbed a bank in Nevada and later founded an organization that helps former inmates; in the other, he presided over a naturalization ceremony for new U.S. citizens.

The RNC’s second night, themed “Land of Opportunity,” highlighted Donald Trump’s position in such areas as the economy, trade, immigration, and drug abuse.

Kate Bedingfield, a spokesperson for the Biden campaign, called the RNC “Donald Trump’s Alternate Reality Convention” in a statement.

“In this delusion, thousands of Americans didn’t die in the last week from COVID-19, nor have millions of Americans been infected or put out of work. Our economy hasn’t ground to a halt and our kids aren’t being kept home from school,” Bedingfield said.

U.S. Secretary of State Mike Pompeo, while on an official trip in the Middle East, also addressed the convention in pre-taped remarks from Jerusalem, a move that has drawn criticism for breaking decades of precedent keeping the country’s chief diplomat out of party politics.

The Hatch Act is a federal law that prohibits employees in the executive branch of the federal government, except the president, vice president and certain designated high-level officials, from engaging in some forms of political activity.

The State Department has said that Pompeo is addressing the convention in his personal capacity and no department resources were used for preparing or delivering the remarks.

Donald Trump will formally accept the Republican nomination for a second term from the White House South Lawn on Thursday night despite criticism that federal property should not be used as the backdrop for a campaign event.

Walter Shaub, former director of the U.S. Office of Government Ethics, accused Donald Trump and his staff of abusing “the people’s government by using the White House to host a party’s nominating convention” and destroying ethical norms.

“This breach of norms will send a message to the world that the U.S. is not serious about government ethics, to the federal workforce that their leaders are free to use the government to influence elections, and to the people that the chief public servant is now public-served,” Shaub tweeted on Tuesday.

Investigations into the death of Krachi-East MCE begins