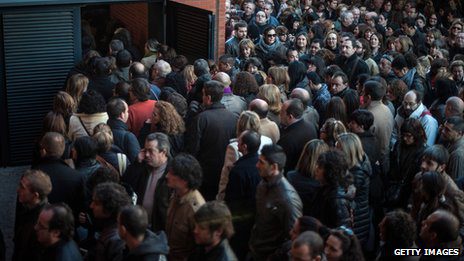 The number of initial jobless claims in the United States last week totaled above 1 million mark for the second straight week, painting a gloomy outlook for the recovery of a labor market ravaged by the COVID-19 crisis.

In the week ending Aug. 22, the number of Americans filing for unemployment benefits decreased by 98,000 to reach 1 million, the Labor Department said in a report. It’s the 22nd time in the past 23 weeks that the figure came in above 1 million.

“While claims have moved up and down in recent weeks, on net, the trend is improving — but only gradually,” Sarah House, senior economist at Wells Fargo Securities, wrote in an analysis, noting that new claims for regular state benefits are still higher than any week during the Great Recession.

After that, the number had been declining for 15 weeks consecutively — though they were still at historically high levels — before the trend was reversed in the week ending July 18 amid a resurgence in COVID-19 cases.

House, however, noted that “ongoing weakness is also evidenced” by rising claims for the Pandemic Unemployment Assistance (PUA) program, a federal program that covers independent contractors or the self-employed, who are not eligible for regular state programs.

The Labor Department’s report showed that jobless claims under the PUA program totaled 607,806 in the week ending Aug. 22, an increase of 82,820 from the previous week.

“The drop in initial claims shows that the labor market is heading in the right direction, but there remains a long way to go,” House said.

A Ghana Card Is More Important Than a 1,000 Interchanges – Bawumia