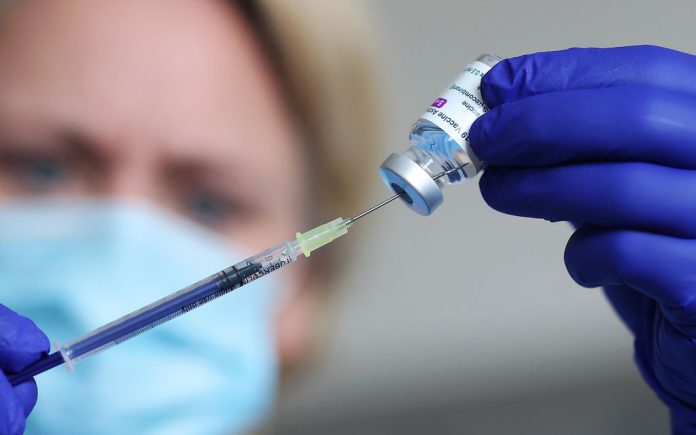 U.S. federal health agencies on Tuesday called for a pause in the use of Johnson & Johnson’s COVID-19 vaccine after rare blood clotting cases emerged in six recipients.

In a joint statement Tuesday, the U.S. Centers for Disease Control and Prevention (CDC) and the U.S. Food and Drug Administration (FDA) said they are reviewing data involving six reported U.S. cases of a rare and severe type of blood clot in individuals after receiving the Johnson & Johnson COVID-19 vaccine.

In these cases, a type of blood clot called cerebral venous sinus thrombosis was seen in combination with low levels of blood platelets.

All six cases occurred among women between the ages of 18 and 48, and symptoms occurred 6 to 13 days after vaccination. These adverse events “appear to be extremely rare,” the statement said.

Treatment of this specific type of blood clot is different from the treatment that might typically be administered. Usually, an anticoagulant drug called heparin is used to treat blood clots.

In this setting, administration of heparin may be dangerous, and alternative treatments need to be given, according to the statement. More than 6.8 million doses of the Johnson & Johnson vaccine have been administered in the United States as of Monday, according to the CDC.

In a White House briefing Tuesday, Anthony Fauci, the nation’s top infectious disease expert, said the pause will allow more investigation into the cases, including the mechanism of the reactions, and history of the recipients.The investigation would shed light on what would happen and what should do, he said.

Noting the percentage of this rare side effect was low, Fauci said less than one in a million Johnson & Johnson vaccine recipients experienced blood clots.

But he recommended people who have administered the Johnson & Johnson vaccine to be on lookout for symptoms including severe headaches, shortness of breath, abdominal pain and leg pain within three weeks of vaccination. The CDC Advisory Committee on Immunization Practices will meet Wednesday to discuss the cases and assess their potential significance.

The FDA will review that analysis as it has also launched an investigation into these cases. “Until that process is complete, we are recommending a pause in the use of this vaccine out of an abundance of caution,” said CDC Principal Deputy Director Anne Schuchat and Director of the FDA’s Center for Biologics Evaluation and Research Peter Marks in a joint statement. Jeff Zients, the White House coronavirus coordinator, said Johnson & Johnson’s vaccine pause would not have a “significant impact” on U.S. vaccination efforts.

The Johnson & Johnson vaccine makes up less than 5 percent of the more than 190 million recorded shots in arms in the United States to date, Zients said at the White House briefing. “We have more than enough supply of Pfizer and Moderna vaccines to continue the current pace of about 3 million shots per day,” he said.

Johnson & Johnson said Tuesday it is aware of the rare disorder involving people with blood clots in combination with low platelets who have received its COVID-19 vaccine. “In addition, we have been reviewing these cases with European health authorities. We have made the decision to proactively delay the rollout of our vaccine in Europe,” the company said in a statement.

The severe adverse events came at a time when U.S. health officials are encouraging Americans to get vaccinated as soon as they can. Experts are concerned that the blood clots related to Johnson & Johnson’s vaccine may heighten vaccine hesitancy of the public.