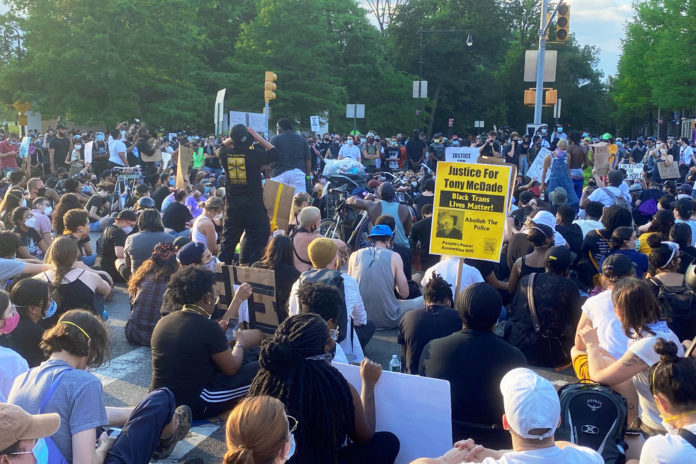 The Fourth of July weekend is drawing near in the United States, but this year’s Independence Day comes against an unusual backdrop, marked by protests and unrest that have spanned more than a month over racism and police brutality.

In addition to fireworks displays and flyovers by military aircraft, U.S. media said that the celebrations will be joined by protests prompted by the death of George Floyd, and that some 20 protests are scheduled for Saturday and could extend through the night.

Nationwide protests have been going on against police violence in response to the fatal arrest of Floyd, an African American man who died after a white Minneapolis officer pressed his knee into Floyd’s neck for nearly nine minutes in May.

Citing recent polls, U.S. news daily the New York Times said Friday that about 15 million to 26 million people in the country have participated in related demonstrations, and the figures “would make the recent protests the largest movement in the country’s history.”

After the Black Lives Matter protests broke out, numerous controversial statues across the country have been targeted. Protesters supporting the statues’ removal have said that the monuments are in memory of figures believed to be symbols of racism.

U.S. President Donald Trump said on social media in late June that he has signed an executive order to protect the country’s monuments.

On June 22, a few days before his announcement, protesters attempted to topple a statue of former U.S. President Andrew Jackson in a park near the White House, but were dispersed at night by police using a chemical irritant.

Police and protesters briefly clashed on the day as city officials attempted to clear out tents erected on a street near the White House and the Black Lives Matter Plaza, saying they were creating a potential safety hazard.

In New York City in late June, hundreds of people camped outside the City Hall in Lower Manhattan to demand cuts of police funding.

The “Occupy City Hall” movement is asking the city government to slash 1 billion U.S. dollars off the annual budget of the New York City Police Department, which is often 6 billion dollars.

The movement came as many protesters across the nation have called for the defunding of police forces. It also came at a time when the city was experiencing a spike in gun violence.

Protests have continued to see casualties, with a recent case occurring in the U.S. city of Louisville, Kentucky.

On June 28, one person was killed and another injured in a shooting incident during a protest in the city. Reports of shots fired at Jefferson Square Park came in at night, after which Jefferson County Sheriff’s Department personnel arrived at the site and found two victims suffering gunshot wounds.

Police were performing life-saving measures on the man who later died at the scene. The second victim was hospitalized with non-life-threatening injuries.

The resolution, in particular, condemned police brutality that led to the deaths of Floyd in Minneapolis and other people of African descent.

The resolution came as protests in response to Floyd’s death and police brutality also took place in some other countries. Enditem