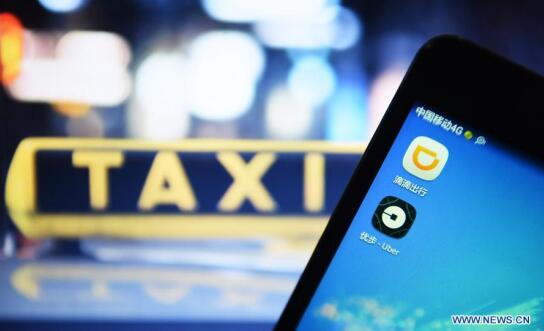 Photo taken on Aug. 1, 2016 shows Apps of Didi and Uber on a cellphone of a citizen in Hangzhou, capital of east China’s Zhejiang Province. [Photo/Xinhua].

According to United Daily News in Taiwan, after three and a half years of operation in Taiwan, Uber received 11 penalties with fines totaling US$7.42 million and was required to close business by the transportation administration in Taiwan yesterday. Uber announced to close its business in Taiwan on Feb. 20. Meanwhile, the Uber TAXI service, which is scheduled to be online in February, was also closed. However, UberEATS service, which was online at the end of last year, will continue its service.

However, Uber’s business is related with motor transport service without business registration certification and professional driver licensing. Over the past three years, Taiwan authorities issued 513 penalties with a total fine of US$3.11 million to Uber and its drivers. Uber paid US$2.2 million.

With the implementation of an updated law, the fine amount has been increased greatly by the Taiwan authorities. Since the implementation of the new rule Jan. 6, any company who breaks the new rule will be fined US$32.3 thousand, and the fine amount will be raised to US$161.2 thousand for the second violation. Anyone who breaks the rule six times in total or three times in half a year will be fined with US$806 thousand and required to close its business.

By Jan. 20, 48 Uber cars had been banned and a total amount of US$35.47 million in fines had been issued by the transportation administration of Taiwan.