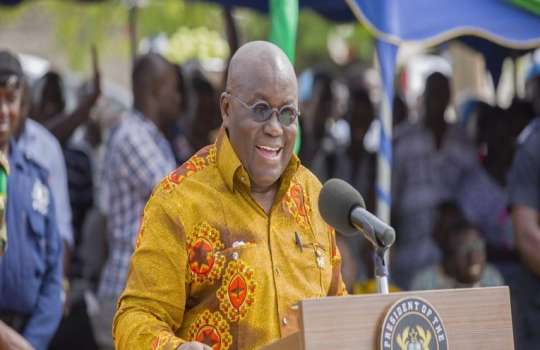 President Nana Akufo-Addo has asked authorities of the University for Development Studies (UDS) to stop transferring some key Departments and programmes to its Tamale campus since the Wa campus is to become autonomous.

“I don’t understand, tell them to stop the practice. Take personal interest in this. They have to stop it”, President Akufo-Addo said, when he called on Wa Naa Fuseini Seidu Pelpuo IV, Paramount Chief of the Waala Traditional Area, in Wa on Tuesday.

He was there as part of a day’s working visit to the area to perform the ceremony for the construction of Solar power project with a combined capacity of 17 megawatt at Kaleo and Lawra in the Upper West Region.

The President said what was happending if allowed to continue would defeat the purpose for the University, “if all important programmes and courses are taking away from the Wa campus”.

He had already assented to the bill, establishing the Wa Campus as a fully-fledged University.

He asked the Ministry of Education to work together with the Wa Naa and other stakeholders in the region to ensure that the practice was stopped to make the University relevant.

Responding to some concerns expressed by the Wa Naa Fuseini Seidu Pelpuo IV raised, President Akufo-Addo gave the assurance that he would work to address challenges pertaining to the new regional hospital, the airport and the upgrading of the Wa Polytechnic into a Technical University.

He said he has taken note of the concerns of inadequate doctors and nurses at the Municipal hospital and said the Ministry of Health will address that concern.

“As far as the University is concerned I am surprised that it is still an issue today because I have already given assent to the bill”, he stated.