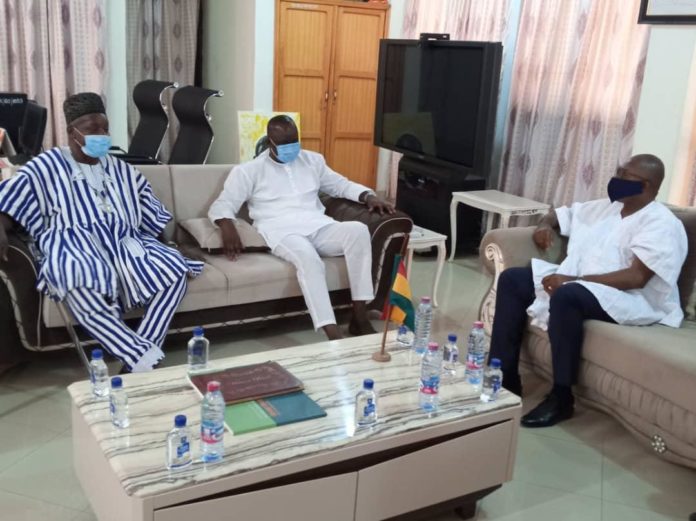 Dr Hafiz Bin Salih, the Upper West Regional Minister, has said the Wa campus of the University for Development Studies (UDS) has since its establishment made a great impact on the lives of the people of the region.

He said given its current status of an autonomous university under the new name “Simon Diedong Dombo University of Business and Integrated Studies (UBIS); he was expecting an even greater impact in terms of transforming the lives of the people of the region and beyond.

Dr Bin Salih said this when the newly inaugurated Governing Council of the University led by the Vice Chairman, Naa Puowele Karbo III, and Professor Philip Duku Osei, the Interim Vice Chancellor, paid a courtesy call on him at his office in Wa.

The Regional Minister, who is himself an alumnus of the University, said seeing members of the Governing Council was a dream come through, saying since he took office getting autonomy for the Wa campus was on top of his priorities and that he was glad to see it come to light.

“I’ve always been clamoring for a national university and not a regional one and if you look at the composition of the Governing Council, you will realise that has been catered for”, he said.

Dr Bin Salih expressed confidence in the members constituting the Governing Council and urged them to bring their expertise to bear to ensure the speedy development of the University in terms of infrastructure and recruitment of staff as well as their capacity enhancement.

He said the Regional Coordinating Council (RCC) under his leadership would do all it could to give the Governing Council the needed support noting in this regard, the RCC has released one of its bungalows to house the Interim Vice Chancellor.

“Until today, I’ve never met the Interim Vice Chancellor, Professor Philip Duku Osei, but I read his profile and I was so impressed”, he said and urged him to leave a meaningful legacy behind.

Naa Karbo told the Minister that the purpose of the visit was to thank him for his role so far and to inform him that the Council has started work.

He commended President Akufo Addo for not just giving the people of Upper West Region a University but also naming it after a very great sons of the nation in the person of Simon Diedong Dombo – “one of the key political leaders in the political history of Ghana”.

The Vice Chairman said the Council has accepted the challenge and would put the necessary things in place to facilitate the speedy growth of the University.

Prof Osei said the University has already done temporary reconnaissance of the two campuses of the University – the old site around Sombo hosts the Business School and the new site around Bamahu is hosting the Integrated Studies.

“We’ve seen the enormity of the task ahead of us and we’ve planned some reorganization of programmes and faculties and to enhance staff capacity”, he said.

“We look forward to establishing ourselves and branding our University appropriately and work hard to recruit new students into the University, the basis for the growth that we are looking for”, he added.

The Interim Vice Chancellor also thanked President Akufo Addo adding that they are looking forward to getting other forms of resources including seed money so that the enormous infrastructure development requirements would be fulfilled in due course.