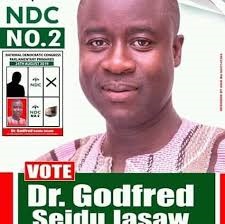 Dr Godfred Seidu Jasaw, a Senior Lecturer at the Wa campus of the University for Development Studies (UDS), has won the Wa East Parliamentary seat on the ticket of the NDC.

The total voter population at the Constituency stands at 43,536, out of which, 36,524 participated in the polls and total valid votes were 35,674 with whopping 850 rejected ballots.

Mr Jasaw, in his victory remarks commended the people for conducting themselves peacefully throughout to the declaration and assured that he would serve the people to justify the confidence reposed in him.

“I want to first of all thank the team and everyone that contributed to this victory. As you know, a week or so ago, I lost my Constituency Secretary who doubles as my campaign manager. So, this victory is what he actually fought for throughout, and so we wish to dedicate this victory to the memory of Kuri Suglo, who worked tirelessly for the success of this campaign,” Dr Jasaw noted.

The MP Elect acknowledged that, they had gotten the change they were looking for and requested from the people, assuring that he would help bring the change they promised the constituents.

The MP Elect, however, called for unity of purpose, noting that, the work as MP, requires all hands on deck and collective efforts.