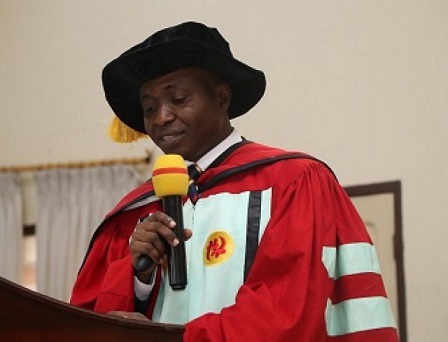 The University of Energy and Natural Resources (UENR) has held its fifth congregation ceremony to award degrees and diplomas to a total of 1,347 graduands who had successfully completed different programmes of studies.

Statistically, 344 graduands, comprising 177 males, that represented 51 per cent and 167 females which is 49 per cent graduated with diploma, and out of that 102 had distinction and 242 got passes.

At the postgraduate level 17 graduands, consisting of 13 males and four females graduated.

They included one Doctor of Philosophy (PhD) in Sustainable Energy Management (SEM) and one PhD in Environmental Engineering Management (EEM).

The others were five in Master of Philosophies (MPhils) in Social Forestry and Environmental Governance, three in Master of Science (MSc) in SEM and three MSc in EEM.

Speaking at the ceremony, Professor Elvis Asare-Bediako, the Vice-Chancellor expressed satisfaction that the number was clearly an improvement upon the numbers that graduated in the previous years.

Cumulatively, he added, the University had graduated a total of 3,862 graduates since its inception in 2012.

Prof. Asare-Bediako commended President Nana Addo-Dankwa Akufo-Addo’s government for the laudable initiatives and tremendous efforts to position the country on the path of accelerated socio-economic development.

He said the government had not relented in its efforts and commitment to support the university, saying the institution has therefore, positioned itself to contribute immensely towards the realisation of the government’s Ghana Beyond Aid agenda.

Prof. Asare-Bediako said in its realization, the University’s School of Agriculture and Technology at Dormaa-Ahenkro has been working tirelessly to support the government’s Planting for Food and Jobs and the Rearing for Food and Export Programme through its Agricultural and Poultry Projects.

He announced that in partnership with the German government and the British Council, the university has trained at least 500 artisans to enable them to set up their own businesses and also employ others.

He said the university has also collaborated with the Chinese government to provide some tertiary and second cycle institutions and some communities in the country with solar power systems for the provision of electricity.

Prof. Asare-Bediako told the graduates the era when job opportunities awaited people had gone, saying, rather people must look for jobs, and that was the reason why the University has impacted into them knowledge, abilities to bring out their potential.

In that sense, he advised that, they must not wait for employment opportunities but should be creative and innovative to exhibit the entrepreneurial skills acquired for the creation of their own jobs and eventually employ others.

ECOWAS holds Retreat for its Interdepartmental Committee on Trade Facilitation