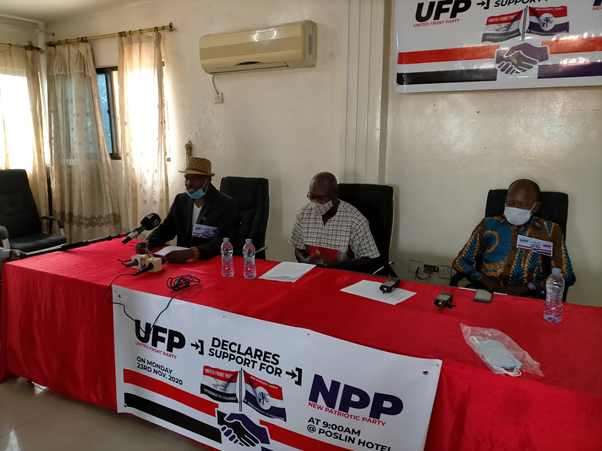 Some leading members and supporters of the United Front Party (UFP) have declared their support for the New Patriotic Party (NPP) in the December 07 elections.

According to them, the declaration followed a study conducted by the research department of the party, which came out with a report that the NPP was the party which needed the support of Ghanaians to continue to roll out innovative social interventions policies for the benefit of all.

At a press conference jointly addressed by three leading members of the party at Suame, near Kumasi, they urged all its rank and file to rally faithfully behind Nana Addo Dankwa Akufo-Addo and the NPP and vote massively for the NPP in the December 07 elections for the party to continue its national transformation agenda.

Mr David Essie Bunya, 2016 Vice Presidential Candidate of UFP said all the party members were in support of the decision to back NPP to win the 2020 elections.

“The able leadership of the party has organized all founding members, executive members and all supporters and sympathizers of our great party, United Front Party (UFP) to declare our unwavering support to Nana Akufo-Addo and the NPP in the next general elections on December 07”, he stated at the conference.

Mr Alo Nuhu, National Organizer of UFP said the disqualification of the party in the 2020 general elections was due to the negligence of the leadership.

“Nonetheless, we would not keep our broader support base throughout the country as floating voters but will channel our votes to the appropriate quarters to push the development agenda of Ghana forward”, he emphasized.

Mr Nuhu stressed the need for the UFP not to entrust more than one executive powers into the hands of one individual in the party, adding that a chairman of the party should remain a chairman and not run another office concurrently.

Mr Fred Osei-Agyen, 2012 Vice Presidential Candidate of UFP said all the members were aware of the various developmental and social intervention programmes of the NPP.

“We all can smell, hear, touch, feel and above all see the numerous social intervention policies in the country.

Look at the free SHS which has benefited every home in Ghana. The 1D1F also visible, the planting for food and jobs, free water, free electricity, reintroduction of Nursing and Teacher training allowance, removing the incubation period of NHIS and even integrating NHIS card to the National ID card”, he pointed out.

Mr Osei-Agyen said UFP has no hesitation whatsoever, to recommend Nana Akufo-Addo and the NPP to the good people of Ghana to rally behind and vote massively for NPP in the December 07 elections.