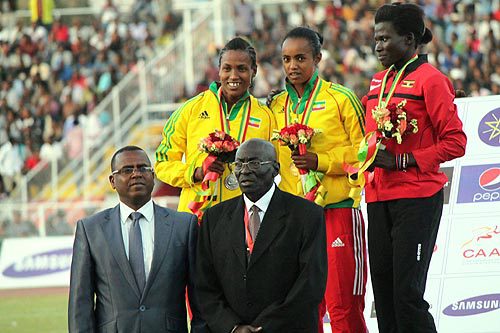 Cheptegei beat Kenya?s Davis Kiplagat and Ethiopia?s Gunessa Ferkansa to the gold medal, which was Uganda?s only gold medal at the biennial event. He was competing in the men?s 10000m event final.

Team Uganda?s performance, which was also boosted by Suzan Aneno and Stella Chasing?s bronze medals in the women?s 800m and 1500m which saw Uganda finish 9th out of the 10 teams that won medals at the four-day event.

Cheptegei, who is also a world junior 10000m champion did not start in the 5000m as he turned his focus to the World cross country where he will lead Uganda?s junior team to Guiyang in a fortnight?s time.

Suzan Aneno also won the bronze in the junior women 800m action in a race where compatriot Esther Chebet finished in 8th position, while World youth Championship silver medallist Geoffrey Balimumiti finished in 9th place in the 1500m final and 6th position in the 800m event.

?It was a good outing for the junior athletes. What we wanted to do is to give them an opportunity to grow up with experience in competing. They got that and entering only six athletes and coming out in 9th position shows that we have a potential for the future,? said the national athletics federation secretary Beatrice Ayikoru, who said that a follow up mechanism is already in place to see that these athletes get better training.

By Norman Katende, The New Vision