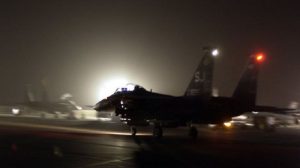 Director of the United Nations Information Service in Geneva Alessandra Vellucci said Friday that the UN Syria envoy, Staffan de Mistura, is closely following the situation after the U.S pounded the Syrian air base of Shayrat with 59 Tomahawk missiles early this morning.

“The special envoy is following closely the situation, including through consultations with relevant interlocutors,” Vellucci told the press here.

“The United Nations will provide additional comments on this issue as new information is brought to bear,” she added.

No indication was given as to how this latest development will affect UN-mediated intra-Syrian peace talks, whose fifth round ended last week.

The Pentagon has confirmed that the strike was intended to deter the Syrian government from using chemical weapons again after an airstrike earlier this week on a rebel-held town in Idlib province in north western Syria.

According to the World Health Organisation (WHO), 84 people have died as a result of the airstrike, which has left a further 546 wounded. Enditem