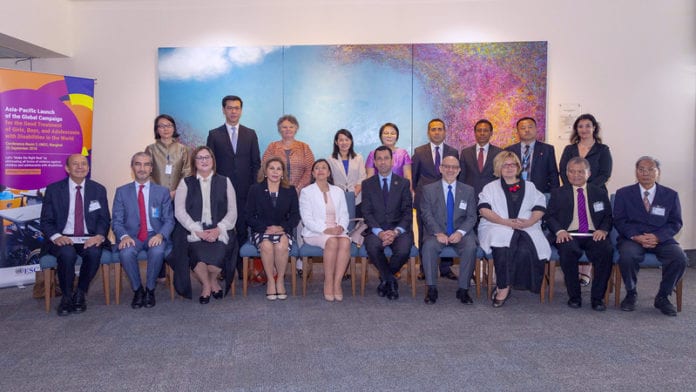 Countries in Asia-Pacific have committed to accelerate efforts to promote the rights of, and eliminate violence against, children and adolescents with disabilities.

The pledge came as part of the regional launch of the Global Campaign for the ‘Good Treatment of Girls, Boys and Adolescents with Disabilities in the World’ held in Bangkok on 25 September.

Jointly organized by the Special Envoy to the UN Secretary General on Disability and Accessibility Ms. María Soledad Cisternas Reyes, and the UN Economic and Social Commission for Asia and the Pacific (ESCAP), the launch brought together policymakers, advocates and persons with disabilities to introduce 10 principles for protection, well-being and development for children and adolescents with disabilities, who are at greater risk of experiencing violence.

In his opening remarks, Mr. Kaveh Zahedi, Deputy Executive Secretary of ESCAP highlighted that the launch provided a timely opportunity to advance regional efforts to enhance the rights for all persons with disabilities.

“This Campaign is a critical part of our efforts to implement the 2030 Agenda for Sustainable Development and to do so in a way that is leaving no one behind,” said Mr. Zahedi. “In Asia and the Pacific an estimated 690 million persons live with one or more forms of disability. Children and adolescents with disabilities are more vulnerable to degrading treatment and more at risk of experiencing violence. Leaving no one behind means addressing their vulnerabilities. And we must act now.”

Special Envoy to the UN Secretary General on Disability and Accessibility Ms. María Soledad Cisternas Reyes added, “Girls, boys and adolescents with disabilities should always be well treated, like other children and adolescents, protecting them from all forms of violence and abuse. Good treatment will produce positive effects on their physical, mental and social development.”

Policymakers gathered at the launch discussed the challenges faced by children and adolescents with disabilities, and shared national experiences and good practices on advancing their rights in the region.

The event was held with the support of the Royal Thai Government, the Embassy of the Republic of Chile to the Kingdom of Thailand, the UN Special Representative of the Secretary General on Violence Against Children, the UN Office of the High Commissioner for Human Rights (OHCHR), UNICEF, UN Economic Commission for Latin America and the Caribbean (ECLAC) and UN Women.

Government pledges to harness potential of children with disabilities

My Passion Is To Help People With Disabilities – Denis A

Ghanaians should accept persons with disabilities

WHO: Pandemic at ‘critical phase’ in Asia-Pacific amid rising cases