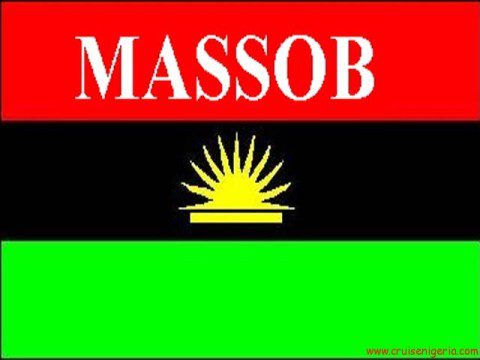 Movement for the Actualization of the Sovereign State of Biafra (MASSOB) yesterday in Nnewi, Anambra State, disrupted human and vehicular movement for several hours on the Owerri, Nnewi-Okigwe, Igwe Orizu and other major roads in Nnewi as its members trooped out in thousands to sensitize the industrial community on its stand on the national conference going on in Abuja.

The rally was also to welcome its new Nnewi North Regional Administrator, Emmanuel Omenka.
Addressing Nnewi residents, Omenka said the MASSOB members planned to visit the home of the late Biafran warlord, Dim Chukwuemeka Odumegwu Ojukwu to consult with his spirit, as well as to pay homage to the Igwe of Nnewi, Igwe Kenneth O. Orizu 111, for his royal blessing and advice and the Bishops of Nnewi Catholic and Anglican dioceses, respectively for their prophetic utterances.

?I?m newly transferred to Nnewi and we want to tell the people of Nnewi that the capital of Biafra is Nnewi. But the headquarters of MASSOB is Okwe, Okigwe in Imo State. The issue of police or other security agents confronting us is a thing of the past because most of them have now realized why we should not be disturbed. They have realized that we are fighting injustices and some of them have secretly joined us and they know that we are non-violent,? Omenka said.

He noted that the actualization of the state of Biafra had dragged on for so long because of those he described as saboteurs of the struggle.
He also blamed it on disunity among the Igbo.

The MASSOB administrator said the Igbo nation was divided into Abuja politicians, Ohanaeze and the MASSOB with different interests but he noted that the groups had of late discovered the need to speak with one voice ?but not yet to the extent of becoming one.?

Omenka said the group supported President Goodluck Jonathan?s second tenure in 2015 ?so long as we are still in Nigeria.?
He said the group also supported the ongoing national confab and insisted on  confederation.