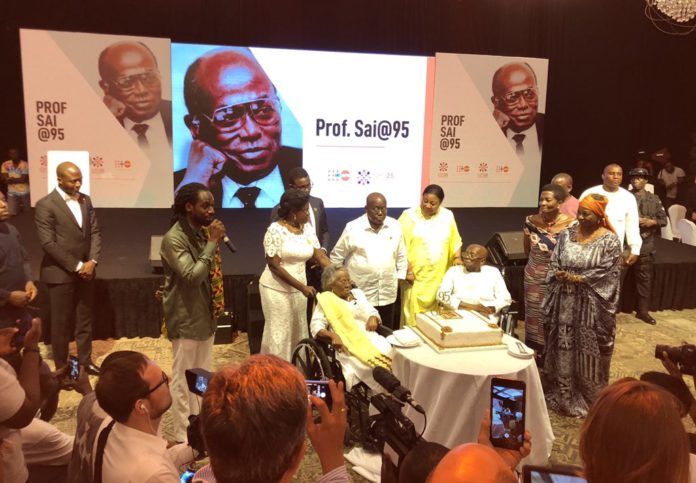 Prof. Torbgo Sai, was very instrumental under his chairmanship of the main committee of the 1994 International Conference on Population and Development (ICPD), which was convened under the auspices of the United Nations and was organised by a secretariat made up of the Population Division of the UN Department for Economic and Social Information and Policy Analysis (now the Department of Economic and Social Affairs) and UNFPA.

The conference was aimed to spearhead the fundamental role of women’s interests in population matters as well as to introduce the concepts of sexual and reproductive health and reproductive rights.

They however, came up with a new population policy to prioritize reproductive health and the empowerment of women.

The ICPD was the largest inter-governmental conference on population and development ever held, with 179 governments in attendance.

The Programme of Action (PoA), adopted by acclamation on September 13,1994, emphasises the integral linkages between population and development and focuses on meeting the needs of individual women and men, rather than on achieving demographic targets.

As 2019 marks 50th anniversary of UNFPA, and the 25th year of ICPD, UNFPA at the celebration which took place at the Labadi Beach Hotel in June this year, seized the opportunity to celebrate Prof. Fred Torgbor Sai, for his role in the UN conferences on population and development right from Mexico City in 1984 to date.

Prof. Sai was instrumental in the development of the Danfa reproductive and community healthcare facility in 1969.

The rural healthcare facility was designed as a field laboratory to train students in community medicine and reproductive health care.

The centre, designed to provide family planning services to people in the region in the most accessible, effective and affordable way is now central to community and public health service provision in the area and is one of very few research centres in Ghana.

In 1974, while Prof. Sai was developing this exciting and important project, his wife, Florence Aleeno Sai, a Home Economics lecturer with the Institute of Statistical, Social, and Economic Research, College of Humanities of the University of Ghana, was actively working with the women of the community to empower them and help them develop revenue generation skills.

She was teaching the women sewing, gari making and farming while running a chicken farm and educating students at the university.

Prof. Sai served in several positions in the Ghana Health Services, including being Chief Physician for Nutrition and the Director of Medical Services.

He was also a Professor of Preventive and Social Medicine at the University of Ghana Medical School.

The author and editor of numerous publications relating to family planning, health and nutrition, Professor Sai served as an advisor to the President and Government of Ghana on Reproductive Health, Family Planning and HIV/AIDS as a final substantive assignment.

Prof. Sai has received much recognition and numerous awards both home and abroad.

Of special note are the 1993 United Nations Population Award and The Prince Mahidol Prize for contribution to gender issues and family planning in 1995.

In 1998, Prof. Sai received the Harvard School of Public Health Alumni Award of Merit for his outstanding contributions to the field of public health; this award is the highest honour the school bestows on its alumni.

In 2006, he was fittingly awarded one of the highest Ghanaian honours from President J. A. Kufuor, the Order of the Star of Ghana. He published his memoirs in 2010, titled: With Heart and Voice: Fred Sai Remembers.

It is a vivid account of his childhood and his experiences in the world of reproductive health.

The entire world of reproductive health celebrates Prof. Sai today and thanks Ghana for sharing its illustrious son with them.