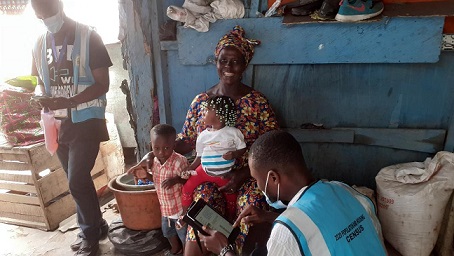 The United Nations Population Funds (UNFPA) has expressed satisfaction about the ongoing Population and Housing Census which started on Monday June 28, 2021.

Mr Niyi Ojuolape, the UNFPA Country Representation said this on Wednesday when officials of UNFPA and the Ghana Statistical Service visited selected centres in Osu and Adabraka to monitor the Census exercise.

Mr Ojuolape said their outfit had deployed observers across the country for independent monitoring of the exercise and received positive feedback and thought it prudent for the team in the headquarters to visit some centres.

“From what we have seen during our monitoring exercise, the processes was going on well and we hope it will continue”, he said.

He said even though there were challenges in the exercise such as unwillingness of the public to cooperate with Enumerators and issues concerning the listing of structures, it later improved through education.

Mr Ojuolape said the system was built such that challenges could be reported and remedied quickly and commended government for that initiative.

Mr Frederick Laryea, the District Census Officer, Korle Klottey Municipality said the area had 26 supervisors for the exercise and so far the processes were going on smoothly and hope it would be sustained till the end of the Census.

Mr David Kombat, International Census Monitor Consultant urged the Census Enumerators to adhere to the rules governing the exercise and always wear their jackets and have their ID cards for identification.

Mr Usman Sinah Ahmed, Field Officer, Korle Klottey Municipality said the residents were cooperating with them after sensitizing them on the importance of the exercise.

The Ghana Statistical Service on Sunday Night June 27, 2021 began enumeration of homeless households, travellers who may spend the night in a car, outdoors, hotels and patients in the hospitals.

The enumeration exercise which started from June 28 will end on July 11, 2021 and the listing of structures to herald the main exercise began on Sunday, June 13, 2021.

Ghana last held a census in 2010. This year’s census was slated for 2020 but was postponed due to the Covid-19 pandemic.

The current population of Ghana is 31,708,826 as of Sunday, June 27, 2021, based on Worldometer elaboration of the latest United Nations data.

Ghana’s population is equivalent to 0.4 per cent of the total world population.

Ghana ranks number 47 in the list of countries (and dependencies) by population.