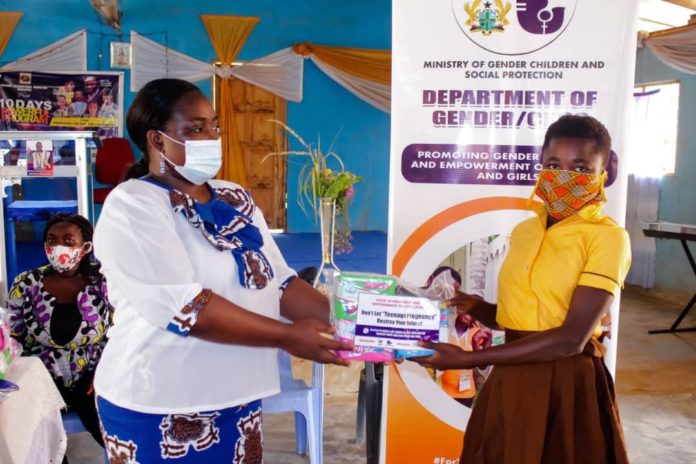 The United Nations Population Fund (UNFPA), in collaboration with the Department of Gender, has distributed assorted items to 400 adolescent girls in the Central Region to help them overcome challenges posed by the COVID-19 pandemic.

The girls, drawn from 12 communities in six districts within the Region, received sanitary pads that could last for three months, sanitisers and nose masks.

Sixty girls from Duakyinase in the Komenda-Edina-Eguafo-Abrem (KEEA) Municipality benefitted from the package on Wednesday.

The donation formed part of the UNFPA’s core mandate to help protect the most vulnerable women and girls across the world and improve reproductive and maternal health.

It was organised by the Department of Gender under Ministry of Gender, Children and Social Protection, and the Central Regional Coordination Council with support from the UNFPA.

Mrs Thywil Eyra Kpe, the Regional Director of the Department of Gender, who distributed the items, charged the girls to focus on their education and abstain from premarital sex, which led to teenage pregnancy and child marriage.

She said the Ministry, in 2016, started mentorship and girls’ empowerment programmes to empower them with the knowledge and skills on pregnancy prevention, sexual and gender-based violence (SGBV) and career pursuit.

She called on stakeholders to support the fight against SGBV and child marriage in the Region.

Miss Augustina Oppong, a student from Duakyinase M/A Primary School in the KEEA Municipality, expressed gratitude to the UNFPA for the kind gesture.

The girls were educated on physical and sexual abuse, causes and effects, prevention of teenage pregnancy, and their rights and responsibilities as adolescents.