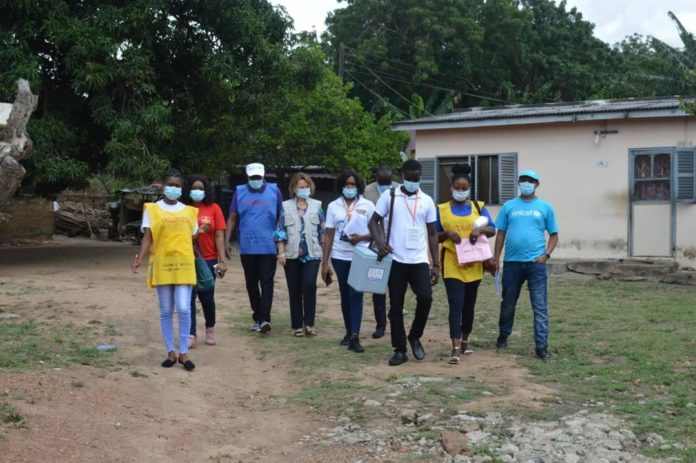 The second round of the polio vaccination exercise which started on October 8-11 is expected to cover children under five years.

The field visit took Madam Duafy to the Legon Hospital and its environs within the Ayawaso West Municipality.

Poliomyelitis (polio) is a highly infectious viral disease, caused by the poliovirus, which largely affects children under five years of age.

The virus is transmitted by person-to-person and spread mainly through the faecal-oral route or, less frequently, by a common vehicle (example contaminated water or food) and multiplies in the intestine, from where it can invade the nervous system and cause paralysis.

Madam Dufay in an interview with the Ghana News Agency (GNA) during the field visit called for intensive efforts towards polio eradication in the country.

She noted that recently Africa achieved the status of being certified free of wild poliovirus, one of the three strains of the deadly virus; however, the fight against polio was not over.

She emphasized that Ghana was wild polio free but had not gotten rid of the type 2 wild poliovirus, as such children were still at risk, saying there was an urgent need to immunize children under five years to ensure that they were protected from the deadly virus.

Between June 2019 and as of end of September 2020, Ghana has reported a total of 31 confirmed cases of children affected by the (circulating Vaccine-Derived Polio Vaccine type2) cVDPV2 in nine out of 16 regions.

Following risk assessments and decisions by Ghana Health Service and its development partners, different rounds of campaigns were implemented in those high-risk regions to stop polio virus circulation.

A total of 4,568,864 children under five years were targeted in the house –to-house exercise in the four-day programme from 10th -14th September 2020 and the same number of children was targeted in the eight regions for the second round, which began on October 8.

Madam Dufay said that during the second round of the campaign, the teams were also administering vitamin A supplements to children aged six months to fifty-nine months, and this was an additional component for children to grow well and stay healthy.

The Country Representative, who said Ghana was doing well with regards to the fight against polio, added that UNICEF and its partners would continue to support the Ministry of Health and the Ghana Health Service to immunize all children.

She noted that elite communities were not cooperating with the teams saying, they preferred taking their children to facilities rather than the polio vaccination team coming to them.

“So, we want to talk to the Associations; the people who can make a difference in their decisions and see how best we can come to a compromise in getting access to the apartments and having the children vaccinated,” Dr Matey stated.