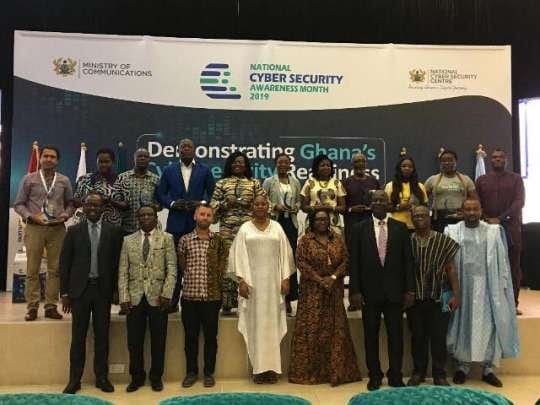 The Deputy Minister for Information, Hon. Pius Enam Hadzide, has noted that, Social media has become an alternative source of news and has caught up with traditional or mainstream media.

He said, today, fake news could affect everyone and has grave societal consequences, notably the defamation of reputable people. He indicated it can also incite fear and panic and cause social unrest. Emphasizing that, “Every citizen with a social media handle and access to a website, can publish fake news without the checks and balances of gatekeepers that the traditional media are subjected to.”

The Deputy Minister, particularly advised the Media to be cautious not to become a channel for propagating fake news. Saying, “Professional Journalism must differentiate itself from Citizen Journalism. Breaking it first instead of breaking it right only turns a professional into a laity.”

The Deputy Minister, was speaking at the closing ceremony of the 5-day celebration of the National Cyber Security Awareness Month, 2019, at the Kofi Annan International Peacekeping Training Centre (KAIPTC), Teshie, Accra on Friday 25th October, 2019.

He further noted that, there is no doubt that ongoing efforts by the Government of Ghana to secure the country’s digital ecosystem are on course. Adding that, “We live in an information age which is fueled by technology, and the increasing utilization of ICT devices.”

He further disclosed that, the increasing access to internet in the country has led to both positive and negative consequences. Reiterating that, “This increase is especially being fueled by the presence of mobile phone devices. By the end of 2018, it was reported that there were 185 million unique mobile subscribers in West Africa, which is 10 million more than the subscribers in 2017. By 2025, it is estimated that the number of unique subscribers in the region will reach 248 million, taking the subscriber penetration rate to 54%, compared to the existing 48% in 2018.”

According to the Deputy Minister, the use of the mobile technology has thus become second nature to many Ghanaians and has resulted in the generation of businesses and other immeasurable opportunities.

He said, Ghanaians continue to rely on mobile phones and other ICT devices to improve their way of doing business, and it is imperative to ensure a consequent prioritization of cybersecurity readiness to deal with any infractions that may occur.

“Furthermore, we must ensure that people are well aware of the habits that make them more susceptible to being attacked. That is why our gathering here this week has been a step in the right direction,” Mr. Enam Hadzide, said.

Partnership with the private sector he said, is very key, if the country wants to effectively combat the incidence of cybercrime and ensure a safer digital Ghana. Adding that, Internet service providers and key data controllers are fundamental in the chain to ensure compliance with policies, strategies and especially combating circulation of fake and malicious information.

He however noted that, there has been a discussion on a Cybersecurity Bill, led by the Drafting Division of the Attorney-General’s department, engaging and provided helpful insights for consideration into the Bill.

The Deputy Minister, further emphasized that, incidence of Elections and Cybersecurity has caught the attention of many people around the world. Stating that, “You will recall that there have been incidents related to elections in Brazil and Kenya. The issue around that of our sister country Kenya focused on Fake News. It is important that systems and processes are put in place to ascertain the veracity of information that is put out during elections, in order to forestall any unwanted eventualities.”

Mr. Pius Enam Hadzide, reiterated that, “Today, we address issues of elections and cybersecurity and this discussion could not have come at a better time, especially with the National Elections coming up next year. Crimes like the hacking of the Electoral Commission’s website to manipulate results and the spreading of fake news can have a disastrous effect on the Nation during such critical times.”

According to him, the National Cyber Security Awareness Month is an initiative we must all embrace particularly, as we seek to embark on a digitalisation agenda. Saying, “I therefore entreat you all to take away from this experience to contribute wholly to the cybersecurity of our country to ensure a Safer Digital Ghana.

The National Cyber Security Advisor, Mr. Albert Antwi-Boasiako, indicated that, the introduction of Information and Communication Technology in electoral systems has received increasing attention and recommendation due to its enhancement of efficiency, transparency, integrity and the speed of electoral administrations across the globe.

However, he said, IT has its own associated risks which include malfunction of biometric equipment, contested issues around integrity of machines, exposure of digital devices to potential external effects like hacking.
Adding that, there are other cyber factors that impacted electoral processes included electoral misinformation of which political candidates, electorates and electoral administration bodies themselves were targeted.”

Institutions like Accra chapter if ISACA, CID, MTN, NCA, and many others were awarded for their immense contribution towards a successful end of the 2019 NCSAM celebration.