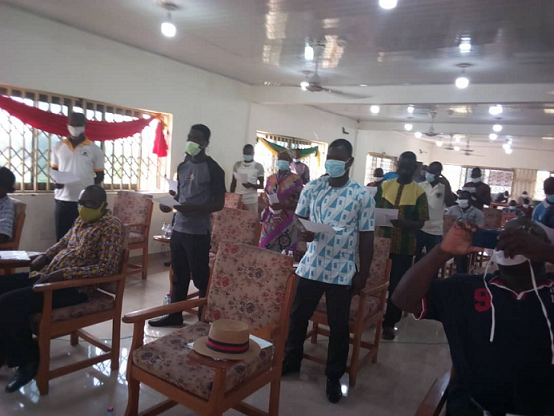 The two Area Councils and Unit Committees of all the 13 Electoral Areas of the Adaklu district were inaugurated and sworn into office at separate ceremonies.

Tonu Area Council and the other eight Electoral Area Unit Committees were inaugurated and sworn into office at Adaklu Tsrefe.

They took the oath of office and secrecy and were sworn into office by Mr Samuel Essel-Walker, Adaklu and Agotime-Ziope District Magistrate.

Mr. Phanuel Kadey Donkor, Adaklu District Chief Executive (DCE) in his inaugural address urged them to render selfless and dedicated leadership and involve the people in every decision and actions of the council.

He said the Unit and Area Councils played a pivotal role in the development of the country and also constituted the bedrock and foundation of the country’s democratic dispensation.

The DCE reminded them that development was a shared responsibility and it therefore behoved on all stakeholders including; Members of Parliament and Metropolitan, Municipal and District Chief Executives to be committed to the agenda of development and poverty reduction.

Others he said were traditional authorities, religious leaders, Assembly members and Unit committee members, who he said should work together devoid of political, ethnic or religious inclination.

He advised them not to take undue advantage of their positions to engage in power struggle with other stakeholders, especially traditional authorities.

Mr. Donkor appealed to them to work hard to generate more revenue for the Assembly saying “the Assembly had decided to cede 50 per cent of all revenues collected by the councils to them to pay staff salaries, allowances and self-help projects among others.

He assured them of the Assembly’s commitment to give them the needed support to enhance grassroots democracy and good governance for sustainable development.

Rev. Fred Agbogbo, Presiding Member of the Assembly reminded them that they would be maligned and insulted, but they should stay focussed and steadfast.

Mr. Hoenyekor on behalf of his colleagues pledged their commitment to work to bring the needed revenue and development to the district.