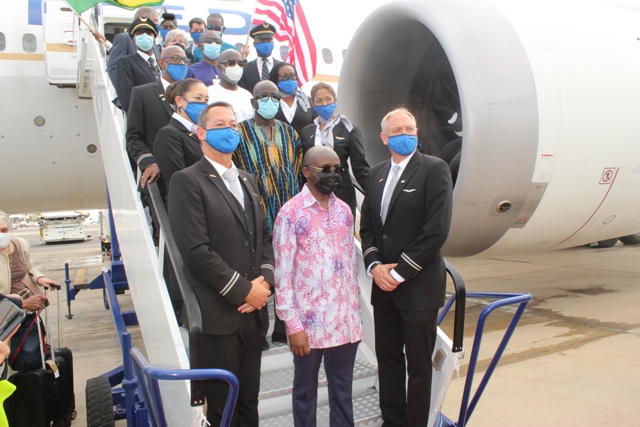 United Airlines on Saturday re-launched its passenger flight operations from Washington DC to Accra to deepen the bilateral relations between Ghana and the United States in the airline transportation industry.

The first flight arrived on Saturday morning at 0808 hours at the Kotoka International Airport in Accra, one hour earlier as expected with 200 passengers out of the total capacity of 284 on the state-of-the art Boeing 787 Dreamliner aircraft with a registration number N27901.

United Airlines, which is the third largest airline in the world as measured by fleet size and number of routes, will compete with Delta on the Accra- New York JFK route.

The Minister of Transport in a speech read on his behalf at a press briefing, commended the decision of United Airlines to re-launch the Washington DC route on Mondays, Thursdays and Saturdays, and was confident that the three times weekly service would quickly grow to daily flights.

“We are thankful for the bold decision of United Airlines to return to the shores of Ghana at such a difficult time in the global aviation industry and for choosing Kotoka International Airport to once again promote closer ties between the two countries, given us a second direct entry point into U.S”, the Minister said.

He said, even though COVID-19 had wreaked havoc on the aviation industry worldwide, the introduction of vaccines offered a shine of hope and that Ghana was already on the road to recovery.

“We assure that government through the Transport Ministry will offer all stakeholders the needed support including; the use of 5th freedom rights to expand routes to and from Accra to ensure the realisation of government’s vision of making Ghana the Preferred Aviation Hub in West Africa.”

Mr Ofori said the Airports Council International (ACI) ranked Kotoka International Airport as the best airport in Africa by size in 2019 and 2020 because of the strong policy initiatives of government and the adherence to high Airports Service Quality.

“In February 2021, Kotoka International Airport received the ‘Voice of Customer Recognition’ from ACI, for demonstrating significant effort in obtaining customer feedback during the peak of the COVID-19 pandemic.”

Mr Ofori assured international passengers of high quality service when they choose Accra as their destination or transit port.

The Managing Director, GACL said the commencement of the route to Ghana was a demonstration of the confidence in Ghana’s aviation industry and the great strides made so far in positioning the country as a leader in Airport Business in West Africa.

“As Operators and Managers of airports, we are committed to providing smooth facilitation to enable United Airlines to achieve a consistently high on-time departure and arrival performance which is in line with our mission of providing world-class facilities and services for the benefit of our stakeholders.

“We believe that United Airlines will in turn, provide excellent customer service to passengers so that together we can make travelling through Kotoka International Airport memorable and delightful experience”, he said.

Mr Patrick Quayle, United Vice President of International Network and Alliances, expressed excitement with the new service between U.S and Ghana, stressing the collaboration would further expand Africa route network and provide customers from Ghana with direct access to the U.S capital.

The U.S. Ambassador to Ghana said, the start of the United Airlines service would promote trade relations and expand bilateral connections between the two countries.

Some of the passengers who spoke to GNA expressed satisfaction about the United Airlines’ services, saying it would provide good competition for other aircrafts.

“It is a good feeling for me, the pilot was excellent and good, the route was smooth and I will always patronise their services”, Dr Joe Amoako, a passenger said.