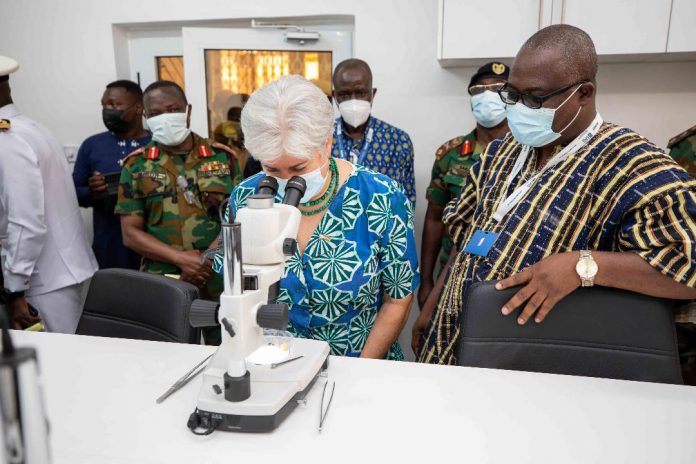 Funded by the US Government through the US Africa Command (AFRICOM) Africa Malaria Task Force (AMTF), the laboratory will establish a combined entomology research and control programe-the first of its kind in Ghana.

A statement issued by the US Embassy in Accra, copied to the Ghana News Agency, said apart from Madam Sullivan, representatives of the Ghana Armed Forces (GAF), Ghana Police Service (GPS), National Malaria Control Programme (NMCP), and the Noguchi Memorial Institute of Medical Research participated in the event.

It said the outdooring of the Joint Operational Vector-borne Disease Entomology Laboratory was the result of strong US-Ghana military cooperation.

The statement noted that in partnership with the GAF, GPS, NMCP, and Noguchi Institute, the laboratory would support the Ministry of Defense and Ministry of Health malaria control programme with mosquito surveillance, directing insecticide applications, insecticides resistance monitoring, and mapping of potential disease-causing mosquitoes.

It said the lab would also be a regional entomology hub in West Africa for other AMTF partners to benefit from, in the future.

Madam Sullivan in her remarks, highlighted the strong bilateral military cooperation between the United States and Ghana, which underpinned the establishment of the new laboratory.

“It is through programmes such as AMTF that the US Government has been able to assist in reducing the number of malaria deaths in Ghana and around the globe,” she said.

“We look forward to seeing the continued progress of our joint efforts through this new laboratory. Together, we will end this mosquito-borne disease within this generation.”

Since 2011, the aim of the US AFRICOM Africa Military Taskforce is to advance the global fight against malaria through capacity-building programmes and multi-country military collaboration in Africa.

In Ghana, the AMTF has provided comprehensive skills in malaria microscopy and medical entomology and fostered collaboration between the GAF and the National Malaria Control Programme.