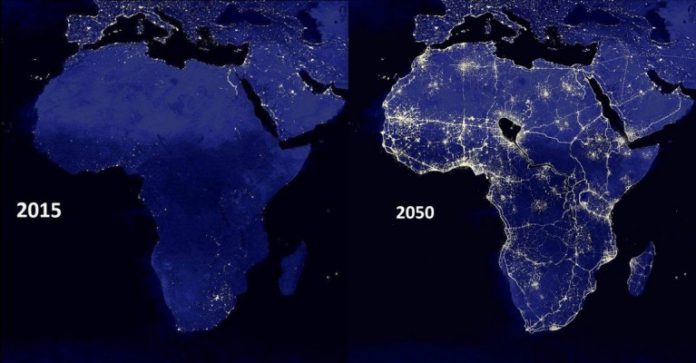 This article, Towards an Improved US-China Relationship, by Stephen Hayes, former President and CEO at the Corporate Council of Africa, suggest a pathway for the new administration of President Biden to improve U.S.-China relations, which thoughtfully involves Africa.

The following suggestion by Hayes is an important contribution to improving relations between the two super-powers. One that I have advocated for years: collaboration on the urgent task of developing the African continent. If this common mission is adopted by statesmen in both nations, there is no challenge that can’t be surmounted.

“It is simple but also perhaps simplistic to propose that both countries work together in a third country or region to aid the development of that country or region. To do so, both countries should have some common goals as to why they would want to work together. In Africa, there needs to be close communication in aiding and abetting the fight against terrorism, perceived as a growing problem on the continent. While there has been some cooperation in this area between the two countries, at least behind the scenes, that cooperation has diminished these past four years. The US perceives terrorism as a major issue in Africa and will likely base much of its development approach for the next four years on this perception. China has similar concerns, but they likely are not as deep as those of the United States. Nevertheless, common security concerns do provide a basis for cooperation. Economic development of a country is also in the interests of China and the United States, but may require much more effort in finding common ground. Working through regional economic groups in Africa on continental infrastructure projects may be another area of mutually beneficial cooperation.” (emphasis added)

It is unclear whether the Biden administration will continue the increasingly antagonistic posture towards China that the Trump presidency adopted. Anti-China group think has gripped both parties in the Congress, and a good portion of the American population as well. The driving force for this potentially dangerous attitude, is the ideology of geo-politics, which reduces the world of nations to winners and losers in a zero-sum game. The alternative is to recognize the shared common interests of all nations and all human beings. The material and intellectual development of human beings, all of whom uniquely possess the power of creative thought, is in the interest of every government. Humanity benefits when nations collaborate to end poverty and enrich the lives of those suffering from economic hardships.

Over four hundred million Africans live in poverty-less than $1.90 per day, and the number is increasing each year. The African continent has the greatest deficits in hard and soft infrastructure of any continent in the world. The shortage of electrical power is literally killing Africans every day. Through China’s Belt and Road Initiative, infrastructure is being built in numerous African nations, but is woefully insufficient for the needs of Africans.

Rather than the U.S. viewing China as an adversary in Africa and defining U.S. policy towards Africa as “countering China,” let us take a more elevated approach. Let President Biden announce that the U.S., with its great economic potential, will collaborate with China in developing Africa and eliminating poverty across the continent, in the next one to two generations. In reality, this cost the U.S. nothing, and the benefits are more than rewarding. Through the issuance of credit for vitally needed infrastructure throughout African nations including projects for: electricity, roads, railroads, schools, airports, healthcare, housing, and water management, the lives of billions of Africans will be transformed. In return, Americans will know they have contributed to the wellbeing of their brothers and sisters in Africa. With the elimination of poverty, the fertile swamps of wretched economic deprivation from which violent extremist groups recruit alienated and desperate youth, will be drained. The spread of terrorism on the African continent will be reversed and over time diminished. AFRICOM, can shift its focus to applying the skills of the Army Corps of Engineers for construction of dams, bridges, and roads. Economically, the pay back for long term, low-interest credit, will be huge. Africa’s growing population, projected to reach 2.4 billion in one and a half generations, will become a large and expanding market for American goods. As African nations experience economic growth, they will be trading with the U.S. for technologically advanced capital goods necessary for the continuous development of their economies. As the Chinese say, it will be “win-win” for Africa, the U.S., and China, and truthfully, for all nations on our planet.

I give my full-throated support to Steve Hayes’ proposal for China and the U.S. to work together to develop African nations as a means of improving U.S.-China relations.

Lawrence Freeman is a Political-Economic Analyst for Africa, who has been involved in economic development policies for Africa for over 30 years. He is the creator of the blog: lawrencefreemanafricaandtheworld.com

Africa must invest in healthcare research and technologies – Discussants