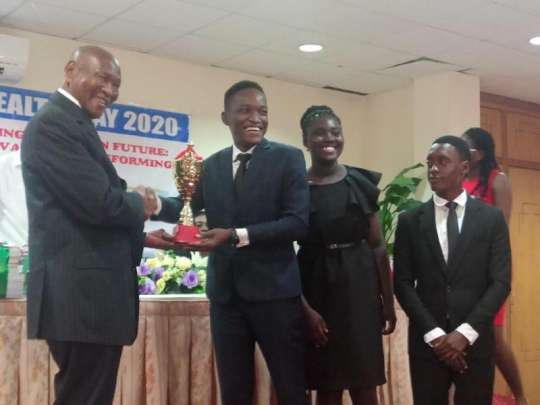 The event, which was held for tertiary and basic educational institutions in Accra was organised by the Commonwealth Human Rights Initiative (CHRI) as part of activities marking this year’s Commonwealth Day.

At the end of the debate on the topic: “Is the Commonwealth Still Relevant”, the UG Debating Society scored 254 points to lift the trophy together with some assorted books for their Society.

Whereas, the UPSA Debating Society, which had 187 points, also received a trophy and some assorted books for their Society.
Commonwealth Day is an annual celebration observed on the second Monday of March by people all over the Commonwealth in Africa, Asia, the Caribbean and Americas, the Pacific and Europe.

The Commonwealth is a political association of 54 member states, mostly former territories of the British Empire.
This year’s event is centred on the theme: “Delivering a Common Future”, highlighting how the 54 member countries in the Commonwealth family are ‘innovating, connecting and transforming’ to help achieve some of its biggest goals like protecting natural resources and boosting trade.

The basic schools’ debate category on the topic: “Can connecting, innovating and transforming deliver a future for the Commonwealth?” was between the Kaneshie Kingsway “One” Basic School and the Adabraka Cluster of Schools.

Team Kaneshie Kingsway “One” Basic School scored 250 points to defeat the Adabraka Cluster of Schools, which had 218 points.

Members of the Kaneshie Kingsway “One” Basic School debating team, which include Master Kwame Boateng Kankam, Master Caleb Bannor and Nana Abena Ampadu-Boateng; for their prize received a trophy and sorted books for their school’ library.

The Adabraka Cluster of Schools debating team, which was composed of Master Joshua Tawiah, Ms Gloria Amaglo and Ms Priscilla Agbenyeke, were also given a trophy and sorter books for their library.

Mr Andrew Barnes, the Australian High Commissioner to Ghana, in his address at the opening ceremony of the event, said the Commonwealth as an organisation was facing a number of critical challenges.

“Foremost of these changes is its relevance. The Commonwealth must reform itself so that it remains an organisation fit with a future and relevant to its members and the wider world, the High Commissioner said.

Madam Mina Mensah, Head of CHRI Africa Office, said the event was part of the CHRI efforts to showcase what the Commonwealth was about and its worth.

She said it is important that the youth in member countries of the Commonwealth are connected to the organisation; stating that “after all you are the future”.

“If the current generation passes by, you are the ones who are going to hold the ford and you can only do that if you innovate and transform and think about the things that are able to push you forward to become the kind of people that you can proudly say that Commonwealth is one of the things that you know about”.

Mr Sam Okudzeto, a Member of the Council of State, who chaired the function, in an interview with the Ghana News Agency, said the Commonwealth was still relevant and enables member states to assess their relationship with one another.

He said the Commonwealth has enabled member countries to have educational links through which students could move across to study; adding that “they don’t have to go and study a foreign language because we have a common language, which is English”.

Mr Okudzeto, who is a legal luminary, also urged the youth to learn and be desirous of learning.